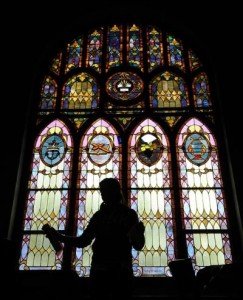 York County, Pa., residents enjoy works of art in virtually every town. They are on display in accessible public view. The artwork – stained-glass windows – are mountedin the churches that make Church Street such a common name in the county. Congregations built many churches between 1900 or earlier and 1930. In those days, stained glass windows represented a staple of such buildings. In fact, as in a museum, the artwork has labels. The windows often are dedicated to families or contributed to the life of the congregation or monetarily to the windows. This photograph is from one such church along Main Street in Windsor. Power for Freedom ministry recently purchased the church. See more photos by York Daily Record/Sunday News photographer Jason Plotkin of the building’s interior. Also of interest: Windsor: Home of “stately old houses that may appear to be miniature castles” and Terry Downs’ series on the 31 J. Horace Rudy stained-glass windows in York’s First Moravian Church.

Blake Stough continues to do good work over at Preserving York.

He tells, for example, about a house in eastern York County where six sets of twins were born in 11 years: ‘House of the Twelve Twins.’

And he also wrote about a Scout Fair – yes a Scout Fair – in 1963 at the old Alcazar Ballroom, topic of my recent post about a billiard demonstration there, today known as Cobblestones.

Cleaning out the attic: The Lancaster Intelligencer tells about Lancaster’s Heritage Center Museum and its companion Quilt & Textile Museum is going to sell donated items that don’t represent Lancaster County.

Museums do that sometimes when donated items are off mission. Often, the artifacts have value but have no connection to, in this case, Lancaster County. A fancy technical term seemingly used only in museum circles for such cleanups: deaccession.

Blog post of the day: Buffy Andrews, in Buffy’s World, provides a litany of best of blog posts from the week. You’ll see someone familiar in this particular link salad.

Forum of the day: Exchangers are discussing products made in York – or once made here.