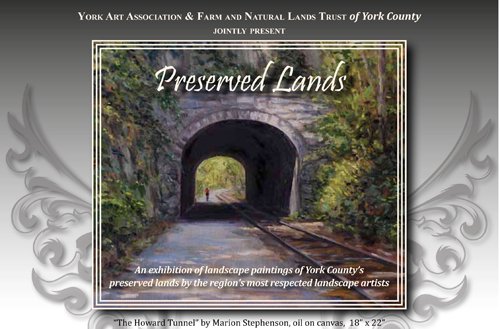 York County, Pa., artist Marion Stephenson’s brush captures Howard Tunnel on the York County Heritage Rail Trail. This image was part of promotional material for an exhibit organized by the Farm & Natural Lands Trust of York County and the York Art Association. Stephenson’s most public work is the ‘From Farm to Market’, part of the Murals of York large-scale paintings in York. (See related photograph below.) Also of interest: Check out these stories and photographs of York/Adams farms, farmers and farm families.

An art exhibit showing preserved land around York County brings to mind the challenge of conserving farmland around here.

And it reminded me of a conversation I had with a longtime York County farm woman several years ago.

Her family was near retirement, and members were contemplating putting the land under the Farm & Natural Lands Trust.

I applauded her decision. Then she paused.

Half of the land would go there, she said. The other half would be sold to a developer.

Her family had invested in that land for decades, and she clearly had the right to sell it for development.

But the presence of the Farms & Natural Lands Trust where farmers can go to gain conservation easements gives them an option.

That choice is badly needed.

The crossover point in which land used for agriculture in York County versus other purposes came in the early 1980s.  Interestingly, that point is about 250 years from the first development in York County. Settlers started crossing the Susquehanna River after 1730.

This loss of farmland was accelerated in recent decades by the so-called Maryland Migration.

After Interstate 83 was completed in 1959, Marylanders had easy access to relatively inexpensive land, housing and taxes north of the Mason-Dixon Line in Pennsylvania.

So a means to preserve our beautiful farmland was badly needed. That’s where the Farms & Natural Lands Trust came in.

To call attention to the good work of land preservation, 31 artists took to the fields to paint landscapes of conserved land.

Their handiwork can be seen at the art exhibit, open to the public from 2 to 4 p.m. Sunday at York Art Association. (Check out other events linked to the exhibit.)

That was a good idea – putting those skilled with the brush to work on documenting land preserved from development.

It’s a colorful way to draw attention to one of York County’s greatest challenges.

“Once (the land) is developed, it’s gone,” Robert Brown, owner of a 90-acre farm in Shrewsbury Township, told the York Daily Record/Sunday News. “You can’t get it back.” 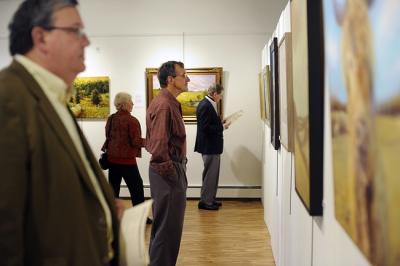 A patron peruses paintings this week at a private opening of the York Art Association’s ‘Preserved Lands.’