Jails in York, Pa.: ‘There were only so many cells in that old stone prison’ 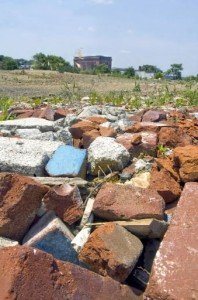 Before the York County’s campus in Springettsbury’s Pleasant Acres came a similar clustering of buildings at the foot of Broad Street.

The York County poor house, hospital and prison stood on that site now occupied by Alexander Goode school. The county property holdings were extensive with agricultural land contributing food for those under county care in the three buildings…

Only the prison remains, or at least the early 1900s building that has been in the news after its owner put it up for sale.
Raymond Sechrist remembered the still-standing Chestnut Street prison along with its predecessor.

The castle-like 1850s prison lost its facade to the existing brick structure, which Sechrist called an addition in his 1991 book, “Skinny Dipping in the Codorus”.

Here’s what Sechrist wrote about the 19th-century structure:

“There were only so many cells in that old stone prison. There was a balcony around the four inside walls where the cells were. The center was all open with two tiers of cells. You could look right down through the center section in the old stone prison house.

“Between the old stone prison and the new jail there was just a narrow passage and, it is said and I think it is true, that the last execution in York was done in there. They have a back door as well as a trap door where the hanging was done.”

(“Skinny Dipping in the Codorus,” published by the Historical Society of York County – York County Heritage Trust – 1991. Photographs courtesy of the Trust.)