York County, Pa.’s, old Chestnut Street jail: ‘York has a treasure in it’

The old York County, Pa., jail on Chestnut Street appears fortress-like on the outside, but the elements are at work on the inside, which probably never was that spiffy. The York, Pa., Daily Record/Sunday News photo shows artwork from prisoners still on its walls. (See additional photos below.) York County prisons have been in the news recently. York County could play host to even more U.S. Immigration and Customs Enforcement prisoners. And York City is looking to renovate its lockup as part of its proposed conversion of its West King Street city hall into a city police station. The neighborhood has made it into the news, too. Stillmeadow Church of the Nazarene has broken ground for its York City Campus. Other posts of interest: Old York County, Pa., jail on endangered list and Prison listing brings back food loaf memories and ‘There were only so many cells in that old stone prison.

Robert Cody lived in York for most of his life and played around the old Chestnut Street Jail.

It fascinated him then – and still does.

“It is one of the few old jails still standing that has a good history to it,” he wrote in an e-mail. “It would be a shame to loose it. York has a treasure in it.” …

Realtor Eric Gearhart stands near what he called the ‘hanging hook,’ where prisoners would have been hanged in the old York County Prison. A reconstructed display of the gallows can be seen at the Police Heritage Museum in York.

Among his youthful discoveries was a secret way into the jail.

But Robert the adventurer ranged beyond the old jail as a youth.

“We also use to hop the trains and ride underneath with a canteen full of water … ,” he wrote.

He and his friends hung out in the hobo city on the other side of the tracks.

York County moved its prisoners into a new jail on Concord Road in 1979, a building which has been enlarged several times since. The county has seen incarceration of prisoners for the Immigration and Naturalization Service as a revenue source.

Robert Cody sees the old Chestnut Street prison, now for sale, as an opportunity for some historical organization to capitalize on.

The old county prison on Chestnut Street in York has been declared an endangered historic site by city officials. 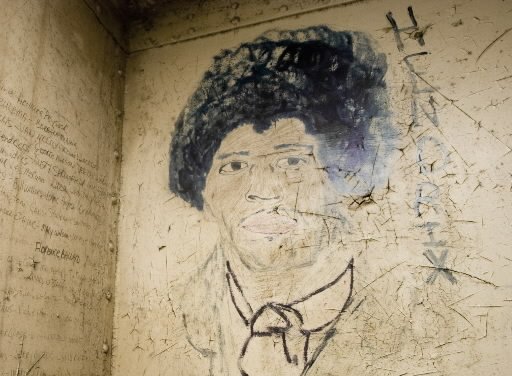 A drawing of Jimi Hendrix remains on the wall in the old York County prison.

Spring Grove’s region has produced the unsung and famous