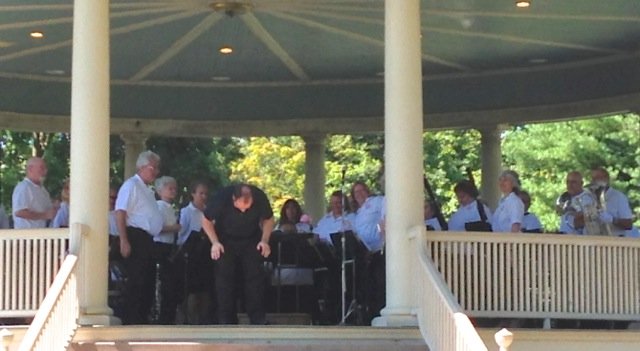 A combination of York County, Pa., community icons came together over the weekend at Farquhar Park. The venerable Spring Garden Band, originating before the Civil War, played 12 works. Their bandstand was the beautifully restored Farquhar Park Gazebo. The park itself, York’s second oldest after Penn Park, is a popular place to stroll – or enjoy a concert. The Avenues Neighborhood Association, representing an old and well-preserved sections of the city of York, sponsored the gathering. This was a gathering of memories and with meaning. Here, Spring Garden Band director Jeff Shaull takes a bow as the concert concludes. Also of interest: Two bandstands stood in York’s Farquhar Park in Northwest York’s early years.

A ydr.com story tells about a boater charting the bed of the Susquehanna River. Interesting stuff. Of course, this is not the first time that the river bed was inspected.

In the American Revolution, Continental Congress, meeting in York, were afraid the British would splash across and take delegates captive.

So they commissioned a study of the river’s fords to gauge the likelihood of that happening and where British raiders would cross. They also believe they were vulnerable to a British fleet sailing up the Chesapeake Bay and then marching to York from the South.

History tells us that the British were content to stay within the confines of comfortable Philadelphia in that winter of 1777-78.

So Congress’ nervousness was unfounded, and its work on the river bed unnecessary.

Banter in Starbucks: It was one of those moments that matter in a local Starbucks recently. The employees there were engaged in lively banter for a couple of hours. They seemed to like each other.

That did not deter from their work. They were constantly in motion and prompt with customers.

But it was an interesting – if unofficial – study about how satisfied workers can help a business. Businesses, in turn, must give their people latitude to have fun.

And all this points out the advantages of being a mobile journalist. You have the ability via a fast laptop to work in the community and observe these meaningful moments.

Bill Davidson, kinsman of the Davidson in Harley-Davidson, rides a new bike off the line at Harley’s Springettsbury Township plant. Davidson was in town as part of the company’s Mount Rushmore initiative.