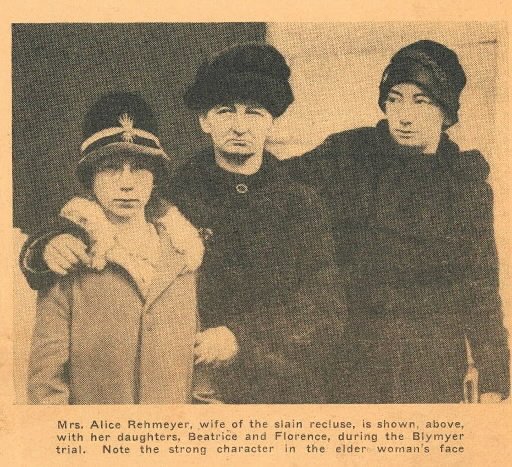 The Hex Murder of 1928, of course, affected families of both the murder victim Nelson Rehmeyer, pictured here, and John Blymyer, pictured below, for generations. Representatives of both families attended a full house at Stewartstown Prebyterian Church’s multi-purpose room this week to hear J. Ross McGinnis tell the story of this famed witchcraft trial. Also of interest: York County’s Hex murder: 5 more quick facts about the forever fascinating witchcraft case.

He spoke at Stewartstown Presbyterian Church, only a few miles from the site of the famed Hex Murder.

McGinnis – born in 1928, the same year as the murder – displayed lawyerly erudition in explaining the attack on powwower Nelson Rehmeyer by a trio who believed this reclusive practitioner of faith healing had cast a spell on one of them.

The three went to Rehmeyer’s isolated farmhouse for a lock of his hair, which they planned to bury six feet under ground, and to gain his copy of ‘Long Lost Friend.’  (John George Hohman’s work was a textbook for powwowers.) They believed this would break the spell. Their plan went terribly wrong, and they killed Rehmeyer with a block of wood and a rope.

McGinnis’ talk was filled with memorable quotes. Here are 10 that stick in the mind, followed by an explanation gleaned from McGinnis’ talk or my own comments:

1. “Come back with me to 1928.” This is Ross McGinnis’ trademark opening in his presentations, also found in his book “Trials of Hex.” When hearing or reading this, I think that this moment was less than 100 years ago and fell about a dozen years before York County became known internationally for its manufacturing ingenuity and prowess in World War II. It was the worst of times and the best of times.

2. “They literally beat the life out of this man.” With all the mystery and intrigue surrounding this case, it is easy to forget its gruesome nature and that Nelson Rehmeyer suffered greatly before his death.

3. “Hounds of hell came back to claim one of its own.” McGinnis gave this as one of two theories offered at the time about why Rehmeyer body, doused with kerosene and set ablaze by his assailants, did not completely burn. The other is the equally unbelievable theory that his bladder burst.

4. “This phenomenon was picking up speed.” York County officials tried to control the growing interest –  emanating from southern York County to the world –  in a murder case that involved witchcraft by expediting the trial to the next term of criminal court.

5. “Cockpit of witchcraft, York County” York County gained this reputation, to the chagrin of local folks. This reminds one of the recent high-profile trials – the race riot murder trials and Dover intelligent design case – that people feared would diminish York County’s reputation.

6. “Unleashed the hounds of hell on the community, unprepared to handle it.” The attention of the nation – and the world – descended on York County. Media from all over came to town, as did famed attorney Clarence Darrow, heightening interest.

7. “Wilbert, I pray for you everyday… .” Defendant Wilbert Hess’s father wrote this to his son, one of the defendants. It was interesting how religion permeated all parts of this case. Those seeking to support Rehmeyer’s reputation as a benevolent practitioner of powwowing,  a form of faith healing sometimes called white magic, point to the fact he was given a Christian burial. His body rests today in St. John “Sadler’s” Lutheran Church in the Stewartstown/Shrewsbury area.

8. “Belief in witchcraft not insanity, judge rules …” This was a headline on a story involving the trial of John Blymyer. His attorney, future Pennsylvania attorney general and Supreme Court justice Herbert Cohen, deployed this defense. The jury convicted Blymyer and fellow defendant John Curry of first degree murder, and they received a life sentence. This trial firmly established this case as witchcraft in the public docket.

9. “I can eat and drink in peace now.The witch is dead.” A statement by one of the defendants after the verdict, demonstrating that they believed their victim practiced a malevolent form of witchcraft.

10. “Somehow or another, mankind reached its full stature tonight.” Wilbert Hess’s attorney Harvey Gross made this statement to a reporter after the jury delivered a verdict of second degree murder with 10 years imprisonment. The future York County judge believed the lesser verdict was due justice.

The backdrop here is one of home invasion – something that just struck rural York County again this week when four alleged robber entered a home after shooting off its door latch.

The case does not involve white or black magic, but it occurred only a few miles from Rehmeyer’s Hollow. Interestingly, the tradition in Rehmeyer’s family is that the motive in the Hex  Murder was robbery, not to end a spell. History is linear – it’s going somewhere – but moments can reappear.

This murder and the three trials, as fascinating as they are, were a terrible moment for York County. And history has a long memory. Members of both the victim’s and assailants’ families live in York County today and still bear the weight of the moment. In fact, representatives of the Rehmeyer and Blymyer families attended Ross McGinnis’ speech.

We must take the Hex Murder case seriously, study it and learn from it. And we can thank Ross McGinnis for keeping us under its spell. 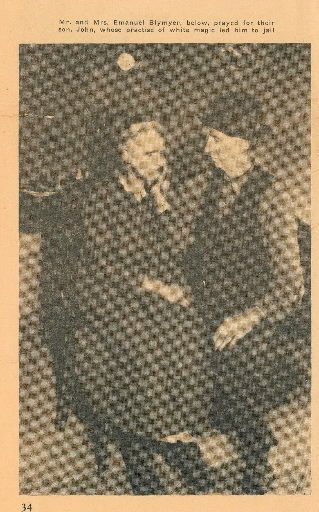 The caption on this newspaper image, reproduced in ‘Trials of Hex’ as was the photograph above, states: ‘Mr. and Mrs. Emanuel Blymyer, below, prayed for their son, John, whose practice of white magic led him to jail. A descendant of John Blymyre, Mark Blymire  (who spells his name differently), attended Ross McGinnis’ lecture Wednesday in Stewartstown. For more about the Blymire family, see Mike Argento’s: Life with a hex murderer in the family tree.

Also of interest:
To see all Hex Murder posts/photos from the start, click here.

Or if you prefer, click on these individual links with their extensive collection of photographs: