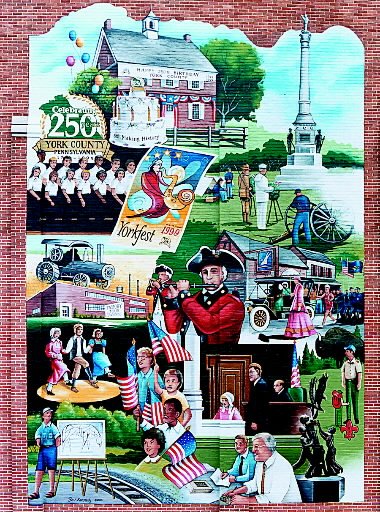 This West Market Street mural, part of the Murals of York, shows the myriad of activities from York County’s 250th Anniversary celebration in 1999. That moment gave York County a spurt of optimism, which has waned a bit since. Also of interest:  ‘250th Chronicles,’ long-forgotten York County history book set, discovered and offered for sale.

York County’s 250th anniversary in 1999 created an excitement about our community and its future.

That came despite Y2K concerns and the general apprehension that comes with the change of a century and a millennium.

Parades, dedication of monuments, completion of the rail trail into York and publication of several anniversary books fueled an expectation about a healthy community future.

“We are representative of the best of Pennsylvania in agriculture and business, in culture and recreation, in caring and commitment,” Stetler wrote.

He ended his message: “May we continue to be proud of our historical past and to remain pro-active in the present, and may we continue to plan well for our future as we move into the new millennium.”

Indeed, those were heady, hopeful times.

Now, more than a decade later, some of that community optimism has ebbed.

Soon after that celebration, York gained the national spotlight with its race riot murder trials, which implicated — and then acquitted — the city’s mayor.

And now, we have one of the highest-ranking state officials with York County roots in the past 50 years, former state Rep. and Pennsylvania Revenue Secretary Stephen H. Stetler, convicted of criminal charges.

From promising Rep. Stetler in 1999 to disappointing defendant Stetler in 2012, it closes the loop on a tough dozen years.

To be fair, the community has seen progress: The growth of an arts district downtown, the return of professional baseball to York, the rapid expansion of York College’s footprint and the growth of the York County Community Foundation as a problem-solving community voice.

I was reflecting on these community challenges with a veteran community member last week.

What York is facing, he reminded me, is no different from the morale concerns facing America.

Which brings us to another challenge for York County.

The city and county leaders, whose wealth and influence, helped shaped so much of York County’s community, are aging.

So, we’re facing a need for change at a moment when our most influential leaders are losing the ability to foster transition.

To find out one reason why, check out: Using York County history to create community embodies a modern trend. 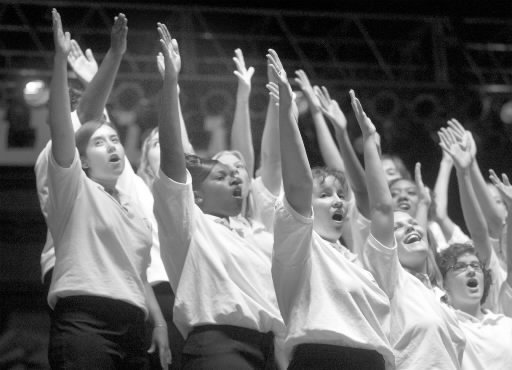 The York County Honors Choir was formed as part of the 250th anniversary of York County in 1999. It is one of the legacies of the celebration, continuing to perform today.
