How historic York County farming, railroading is engaging with the service, information age

This image, courtesy of Google Maps, came to light with a York, Pa., Daily Record story about vehicle vandalism at this rural York County Heritage Rail Trail parking area a few months ago. The Brillhart Station scene caught my eye because it shows a 21st-century re-use of former agricultural and industrial land. That popular York Township park, parking lot and rail trail section on the converted Northern Central Railway right of way show the transition from ag (farming) and industrial use (railroading ) to recreation use. That represents a different kind of sweat. It’s a snapshot of how York County’s economy is changing from its historic agricultural and industrial roots to service and information uses. As for the rural crime mentioned here, that hasn’t changed. Remember the days of horse thievery in rural areas? This is not a moment to get nostalgic for the good old days in rural York County in that regard. Also of interest: Will this old bridge gain new life on the rail trail?

Rene Abel sent along this thoughtful note about his grandfather, Chester Russell Abel:

My late grandfather Abel, like Mr. Grimes, worked at Cole Steel. I believe my grandfather worked there from the late 40’s until the early 70’s. My grandfather was a foreman and was left go shortly after Cole Steel was bought by another company.

He attached a union campaign badge from Cole Steel. He doesn’t know much about it, except that his grandfather’s name (know as “Chet”) is on it.

I will make sure Voni Grimes sees Rene’s email.

I will be speaking about the life and times of Voni and Lorrayne Grimes as a tribute to the couple on Sunday. 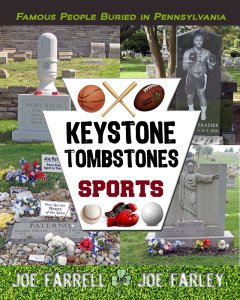 Joe Farrell’s and Joe Farley’s Keystone Tombstones Sports is now out. As the name suggests, the books contains biographies about famous people from the sports world buried in Pennsylvania. The Joes will be at the Sunbury Press Store, 50 W Main St. Mechanicsburg, from 1-4 p.m. on Dec. 20. Here is a list of some of the famous sportsmen covered: Alan Ameche, Richie Ashburn, Nellie Fox, Joe Frazier, Josh Gibson, Eddie Plank and Joe Paterno. Details on all of the Joes’ works: Sunbury Press.

Roy Flinchbaugh has been sending in his astute thoughts about York County for years. His emails have appeared here and as letters to the editor in the York Daily Record.  Here’s his latest letter:

“One of my most unfavorite terms is ‘Black Friday,’ used for the big shopping day after Thanksgiving. When I was growing up I learned that term & it pertained to the day of the big Stock Market crash that began the Great Depression. I suspect that the inventor of this new use for the term is too young to have learned it in that context. So be it for ‘maturity.’ This new use came to pass after I was no longer in retail sales. In spite of it all, I’ll try not to be a stubborn old man, but rather accept the inevitable.”

History mystery: This old mill is in a remote part of York County but people really engaged with the photo on YDR’s Facebook page. Feel free to do the same: