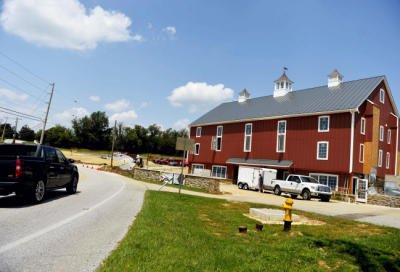 Wyndridge Farm near Dallastown has found two new uses for a 77-acre farm and 120-year-old barn. Wyndridge Crafty hard cider is made there, and the place is being developed into a special events venue. That means weddings and such. ‘The plan is to make Wyndridge Farm into what (owner) Steve Groff calls “a craft beverage destination and special events venue” that will draw visitors from throughout the mid-Atlantic,’ a YDR.com story states. This transition of the land from farm to service use is the agricultural equivalent of the popular practice in York County of making residential lofts from old red-brick factory buildings. Both examples of reuse are positive signs of the times and a way, in the Wyndridge Farm example, of keeping York County’s countryside beautiful. Of course, you can argue that making hard cider and beer on agricultural land is a time-honored York County tradition, so nothing has changed. (Just to remind folks of the more traditional use of farms, check out the photo below.) Also of interest:  Glen Rock hilltop farm: ‘You cannot stay stressed here for long’.

So, you get an idea of York’s might in those days. No. 1 and No. 4 crossed in the heart of York and York County – in Continental Square. It was called Centre Square at that time, for good reason.

The Kiwanis Lake spillway in two eras. For more, check out Picturing History.
+++
Prison news: York County’s old Chestnut Street Prison is back in the news. It has occasionally made headlines as developers have studied it for particular purposes since it closed in 1979, like restaurants and amusement parks. Check out why it’s back in the news: York County Prison. A city economic development official aptly called it a “whale” of a building.
+++
History mystery: This is a little-seen photo. Click on the “goo.gl” link, if stumped.