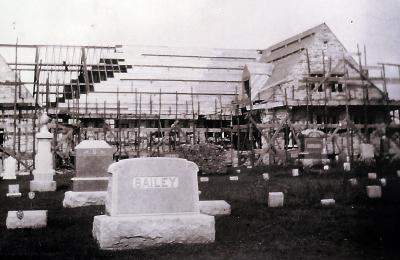 Bethlehem Steltz Reformed Church in Codorus Township is shown in rebuild mode in 1936. The church is a candidate for the National Register of Historic Places. The congregation has always hugged the Mason-Dixon Line. In fact, a ydr.com story on the church gives this brief account: “On Feb. 14, 1795, Philip Steltz sold two acres of land to the church. In about 1801, a log church was constructed, possibly on the south side of Route 851. The front yard of the 1801 church was in Pennsylvania, while the backyard was in Maryland.”  For the complete ydr.com story on the congregation’s effort, see Bethlehem Steltz. (See an ‘after’ photograph below.) Also of interest: Pierceville, York County, Pa. Where is that?

The killing of suspected witch Nelson Rehmeyer, which became known as the Hex Murder, occurred at Thanksgiving time in 1928.

So we’ll take a moment to revisit that topic, via an email from Erica L. Risser Runkles.

She attended Ross McGinnis’ recent presentation in Stewartstown on the murder, which she called “mesmerizing.”

She attended to learn more about the event and also to expand her genealogical research of the Blymyer/Blymier families.

Here is an excerpt from her email:

“My great-grand mother, Amanda Jane Blymyer Ritz was a sister to Emanuel Frederick Blymyer, John H. Blymyer’s father. Amanda died when I was 2 months old, but my deceased mother had been very close to her. Although my grandfather John W. Ritz was a good storyteller, I never heard any stories about his infamous cousin, nor did my mother maintain any contact with Blymire relatives. I inherited many old family photos of the early 1900’s from my mother. As usually happens though, many are unidentified.

“I was delighted to meet Mark Blymire on Wednesday evening and intrigued to see the photo of Emanuel and Margaret Blymyer in the Mr. McGinnis’ powerpoint presentation.”

This is a textbook case of a York County resident who appreciates history and wants to know more. Ross McGinnis inspired her and the scores of other people who attended that presentation in Stewartstown Presbyterian Church in October.

More on “Old Thad”: Southcentral Pa.’s Thaddeus Stevens is a key part of the film “Lincoln.” Joe Farrell, co-author of “Keystone Tombstones” writes to let folks know that if they want to know more about Stevens, check out their newest volume in the series. More at: Key “Lincoln” movie character Thaddeus Stevens buried in Lancaster, Pennsylvania.

More on the Civil War: Christ Evangelical Lutheran Church has released info on its 2013 season of music titled: Songs and Stories of a Civil War Hospital:  Candlelight at Christ Church. For more info, call 717-334-5212.
Forum of the day: Harley-Davidson Bike No. 4 million has been purchased in Florida. Are you one of these customers? Plan to be? Please comment below. Background: Here is probably the most famous Harley sold recently: Bike washed shore made in York County. 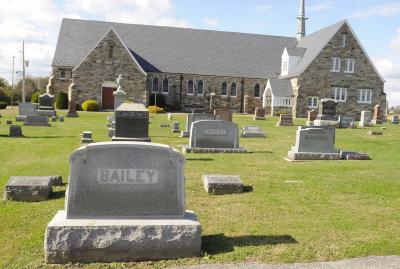 The ‘after’ photograph of Bethlehem Steltz Reformed Church in 2012.  This kind of thing always fascinates me: Buildings that cover two states. Always wonder how businesses so situated do this. Must make accountants happy. Interestingly and unrelatedly, an Associated Press story tells how the Moravian District in Bethlehem, Pa., has been named to the Historic Register.