This surgeon’s certificate includes details of a medical examination of Civil War veteran Wesley Green in 1890. Green, from York County, and other wounded Civil War veterans often went through such red tape to get pensions or increases in their payments. (See another example below.) Also of interest: York County’s black cemeteries: ‘Before desegregation, even the dead were segregated in many places.

Neicy DeShields-Moulton has been researching her family tree, and her work has brought great fruit. She has found several of her ancestors served in the United States Colored Troops in the Civil War.

So when Scott Mingus and I called for Civil War stories for our second volume of “Civil War Voices from York County, Pa.”, she proudly told us about her ancestors.

She pointed to records of her kinsmen, medical details about wounds, pension files and the like.

She found from the paperwork that Wesley Green was hit in the forearm with gunshot, and John Aquilla Harris became ill from standing in water for an extended period. That resulted in kidney problems later in life, according to medical documents.

Despite their wounds, both lived years after the war.

Her research has brought together John Harris with another kinsman, John Aquilla Wilson, her grandfather’s cousin. Quil Wilson signed an affidavit on behalf of Harris.

Wilson, also a USCT veteran, is still remembered in York County, having lived well into the 20th century and topping 100 years in age.

The two vets are buried Fawn Cemetery in Hopewell Township.

Such is the intriguing research that is coming our way for Voices, Part II. 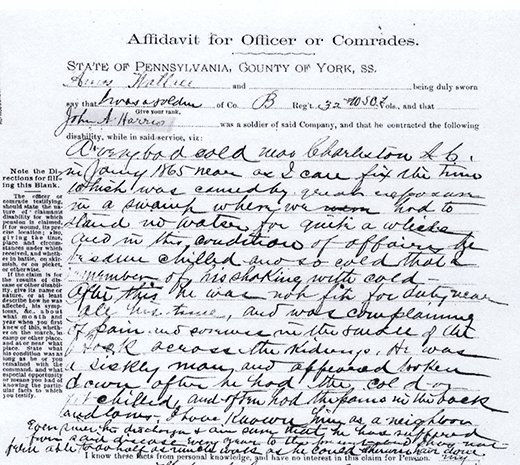 In his postwar government paperwork John A. Harris – like Wesley Green, a USCT vet –  related lingering injuries from exposure. See all black history posts from the start.