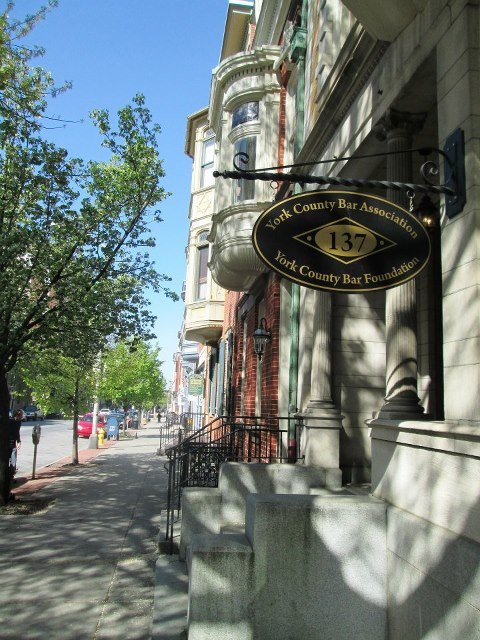 Law Offices of York Walking Tour is set for 6 p.m., Friday, May 3. The tour includes visits to historic law offices in York. “During this fascinating and informative walk, you will see what lies behind the doors of some of York’s most venerable law firms,” a York County Bar Association release states. “Learn about the architecture of some of the City’s oldest buildings that have housed law firms for decades, and the famous cases tried in York.” To check on availability of tickets, which might be limited, contact the York County Bar Association. The bar association’s 137 E. Market St. office is part of the tour. (See additional photos below). Also of interest:  York County Hex Murder: 10 memorable quotes about this famed witchcraft case.

The tour of law offices in downtown York, Pa., will bring forth all kinds of fascinating information.

It will be brought all the more to life via the narration of master storyteller, Attorney J. Ross McGinnis.

But here’s a piece of information that may be the most memorable about the evening tour, sponsored by the Young Lawyers Section of the York County Bar Association.

“Our tour guide, J. Ross McGinnis,  as you know, is the author of the Trials of Hex,” Victoria Connor, bar association exec wrote, “and in an odd happenstance – Ross’ tonsils and adenoids were removed in this bldg. by the Dr. McDowell that owned it at one time. Pre 1970 – how times have changed!!”

This is the type of information, courtesy of the York County Bar Association, is available about the buildings on the 12-stop tour:

137 East Market Street (137) was constructed in approximately 1885. In 19th century (January 1, 1801 – December 31, 1900) American architecture, this was Colonial Revival period, also referred to as the Victorian era. Architecture in the Victorian era was very elaborate, romantic, and emotional. The architecture of the house advertised the amount of money that the owner had.  This is aptly demonstrated by 137 East Market which is an unusual mix of styles (Dutch, Italianate, Greek, Victorian), although this not was uncommon for the time.  Houses of the day were very large with many small rooms: each room had a particular function “a place for everything and everything in its place.” Houses had ballrooms, morning rooms, sitting rooms, libraries, piano rooms, etc. Houses often were set in the middle or towards the back of lots. The exteriors of houses were often brightly colored with false fronts and false chimneys.

Notable features of the exterior of 137 are the slate gambrel roof and the elaborate gable (commonly known as a crow-stepped gable, a stepped gable, or corbie step).  Both are nods to the Pennsylvania Dutch settlers’ style. This decorative gable, often seen in Flanders and the Netherlands, is a stair-step type of design at the top of the triangular gable-end of a building, common in the Victorian era. The top of the parapet wall projects above the roofline and the top of the wall is stacked in a step pattern above the roof as a decoration and as a convenient way to finish the brick courses.

The decorative features on the exterior of 137 also include a stunning copper façade on the gabled dormer third story window, egg-and dart molding, as well as acanthus leaves, Fleur-de-lis and shield medallion appliques attached to the façade.

The Colonial Revival stylists sought to follow American colonial architecture of the period around the Revolutionary War, which drew strongly from Georgian architecture of Great Britain. Features borrowed from colonial period houses of the early 19th century include elaborate front doors, often with decorative crown pediments, fanlights, and sidelights, symmetrical windows flanking the front entrance, often in pairs or threes, and columned porches.

Georgian architecture is characterized by its proportion and balance. Regularity of house fronts along a street was a desirable feature of Georgian town planning which can be seen throughout the City of York. Georgian designs usually lay within the Classical orders of architecture and employed a decorative vocabulary derived from ancient Rome or Greece. The most common building materials used are brick or stone. Commonly used colors were red, tan, or white – as in the case of 137.

The classical elements of 137 include the use of Greek Ionic columns on the front porch and its mosaic tile floor. More slender and more ornate, an Ionic column has scroll-shaped ornaments on the capital, or top. The use of these columns and tile are also seen throughout the interior in keeping with the continuity of design aesthetic.

Upon entering a respectable and luxurious mid-19th century mansion, a visitor would be greeted with an exquisitely decorated entrance hall. There was little doubt that the best mode of treating a hall floor, whether in town or country, was to pave it with inlaid tiles, which were referred to as “encaustic” in the Victorian era.

While the interiors during the Victoria era were typically dark with heavy drapes, dark wood, dark wall paper, and hard wood flooring, at the same time, Neoclassicism was also on the rise. These new interiors sought to recreate an authentically Roman style, employing lighter paint motifs on the walls and ceilings, sculptures in low frieze-like relief or painted in monotones including isolated medallions or vases or other motifs suspended on swags of laurel or ribbon with slender arabesques against backgrounds, perhaps of “Pompeiian red” or pale tints, or stone colors.

Such is the case of 137, where the finest attention was given to the smallest details – from the elaborate faceplate on the front door, to the leaded glass windows and chestnut wainscot to the classic Greek key pattern incorporated into entrance tile floor mosaic. In the vestibule, Mr. Grove (or perhaps Mrs.) also employed the Roman ornamental wall elements and included a “G” for Grove.

No expense was spared as evidenced by the fine craftsmanship and the use of brass fixtures and exquisitely carved woodwork throughout the then 4-story home (including the basement).

Many houses had two hallways and two staircases, one grand for company, and one plain for the children and servants. The staircase for guests allowed for dramatic entrances. The back halls and private rooms were not decorative and were plain with whitewash and wooden floors. The public areas of the house were displays of wealth and virtue. It was an age of materialism, and Victorian houses were correspondingly larger.

The fireplaces each have beautiful mantels with beveled mirrors and contain Victorian era cast iron grates and decorative glazed ceramic tile. The mottling of glazes was a very popular form of adding depth and decorative to the field tile used on hearths and facades from the 1900’s to 1930’s. However, the mantel woodworking is more along the neoclassical style with the use of elaborate carvings and Ionic columns.

The house also features transom windows which could be opened to provide cross-ventilation while maintaining security and privacy (due to their small size and height above floor level). Transoms were typical fixtures before air conditioning became common.

The YCBF’s renovation has beautifully preserved the historical elements of the building while including the modern amenities such as updated electric, air conditioning, heating and plumbing, cable/Wi-Fi access and handicapped accessibility that include a lift to the second floor. Each room includes plaques which honor donors to the capital campaign.

The second floor, now used for meeting spaces, contains a faux skylight at the top of the stairs, one fireplace and one fireplace mantel, the same use of woodwork throughout as well as a beautiful leaded glass fanlight window in the room facing Market Street, most likely a second parlour. These private quarters have inlaid hardwood floors. This floor also includes two modern restrooms.

The third floor, which would have been children’s and servants quarters has two fireplace mantels, and one bath room with a “tile printed” veneer instead of actual tile. The ceilings are lower, stairs narrower and floors and woodworking much plainer. This floor is now used for storage. 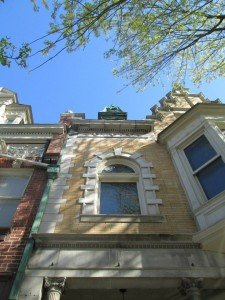 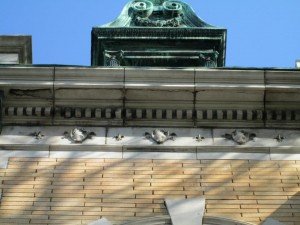 Maximum: 30 people – Open to the public