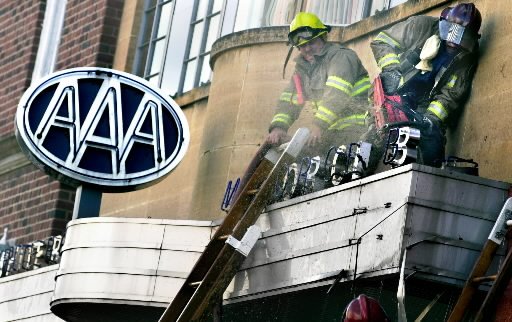 York City Firefighters work to save the art deco facade of the AAA building on East Market Street in York. Fire was confined to the overhang of the structure in this 2000 fire. The bright neon facade and rotating sign is a York landmark. Most recently, Peoples Bank occupied this now vacant architecturally significant building. (See view of full facade below.) Background posts: Coca-Cola out in Springetts… self-storage space is real thing and York’s housing stock not that revolutionary.

York Sunday News columnist Gordon Freireich provided a reminder in a recent piece about the many art deco buildings dot York-area streetscapes.
He pegged his column on the announced renovation of the Coca-Cola building along East Market Street. The uncovered entrance area gives away its art deco design under its siding… . 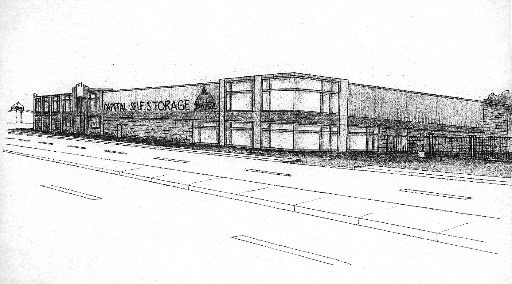 This artist’s sketch depicts Capital Self Storage’s plans for the former Coca-Cola building, with an art deco facade, in Springettsbury Township. Background post: Bottle shaped cars rolled around York
Then he lists other art deco buildings. Here’s his column (1/13/08):

In our rush to Revolutionize York, we sometimes overlook the wide range of architectural diversity that creates such an interesting streetscape for locals and visitors.
Yep, there are plenty of authentic examples and recreations of Colonial era building here. Surely York has some of the best-preserved examples of Victorian buildings and the many years that era encompasses.
What brings this to mind is the article in last week’s York Sunday News that the former Coca-Cola Building – located between York Marketplace and the York Mall – has been sold and will be converted to a self-storage facility. While now mostly sheathed in metal siding, the entrance to the building gives a hint of its original Art Deco appearance.
The building is one of the prime examples of Art Deco architecture in York. In fact, Karen Arnold, executive director of Historic York, Inc., said the building was placed on Historic York’s “Endangered Buildings” list back in 1999 because “we recognized it as such a significant Art Deco façade in York County.” An artist’s sketch that ran with the article last week shows that much of that façade will be uncovered, while some modern touches may be added to the east end of the structure.
That’s good news for those of us who appreciate the Art Deco style, which began in the 1920s and stretched to the 1940s.
The Vern-Mar Apartment building on North Vernon and East Market Streets – just a few blocks from the Coca-Cola Building – is another prime example.
I also like the former AAA Building in the second block of East Market Street for its sleek façade and graceful curved glass. Most recently having served as a PeoplesBank Branch, it is now vacant. The former Manufacturers Association Building in the first block of North Duke Street was recently returned to its Art Deco splendor.
The original part of York Hospital is very much an Art Deco delight.
The former Mt. Rose School (now a church) on Ogontz Street is pure Art Deco, as is – Karen points out – the Edgar Fahs Smith School.
Karen ticks off a number of other Art Deco structures:
· The former White Rose Motors Company at 225 W. King St., which now houses the YMCA of York and York County’s Gymnastics Center and a separate organization, Crossroads Youth Center.
· The YorkArts Building, 10 N. Beaver St., with its wonderful tile design.
· The former York Telephone and Telegraph/GTE building on South Beaver Street.
· The old Woolworth’s and McCrory’s “Five and Dime” structures in the first block of West Market Street.
· The Valencia Ballroom on North George Street is another outstanding example of Art Deco design at its finest.
Karen is also fond of the Carrara glass façade on the Hoffmeyer & Semmelman Law Offices in the first block of North George. “It’s typical of Art Deco. Very pretty and very interesting,” she said.
Although it is somewhat newer than the other buildings, Karen tosses into the mix the former Mary MacIntosh complex (Plaza 2331) on East Market Street near Memory Lane because of its sweeping curve and distinctive plaid exterior decoration. She calls it “near perfect roadside architecture.”
(Note to “newcomers,” if you ever wondered – Mary MacIntosh was a drive-in laundry operation and the plaid design reflected the MacIntosh name.)
There are a number of other examples of Art Deco buildings scattered throughout York County.
Karen notes 32-34 Carlisle Street in Hanover and three buildings in Red Lion: The old Red Lion High School on South Charles Street, the Elks Club on West Broadway, and the former bank building on Main and High Streets.
York County offers a smorgasbord of architectural styles – if we would only open our eyes and enjoy the full banquet before us. 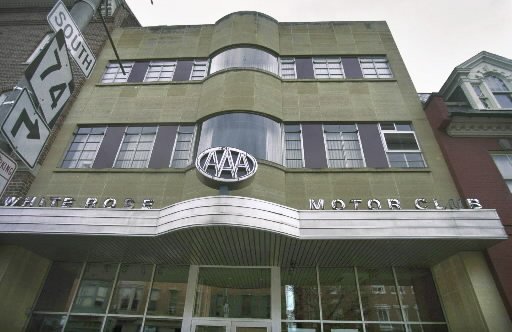 The landmark facade of the AAA building on York’s East Market Street.