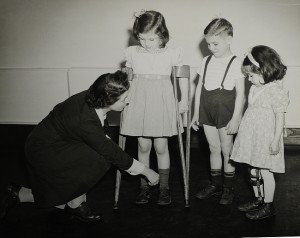 Ydr.com’s oral history series ‘Remember’ explores the dreaded polio outbreaks that unpredictable visited York County, particularly in 1941. That year, more than 100 people contracted polio in York County, and at least nine people died. Towns virtually shut down. Schools closed, and young people couldn’t attend public gatherings, funerals or swimming pools. Here’s one memory, from 89-year-old Grace Lefever: ‘My sister and brother said we were quarantined. We would sit in our backyard, and the family behind us would sit in their backyard with the alley between us. If we wanted to communicate or give them something, we would go and put it in the middle of the alley and then go back to our backyard. Then they would come in and pick it up. … We communicated across the alley, but we couldn’t be together.’ In this undated photo from the York County Heritage Trust files, children are outfitted with braces. For more, visit: Disease ‘struck terror’ into York County. For more in this long-running oral history series, check out: Remember. Also of interest: York County polio epidemic peaked in Sept. 1941: ‘The city was virtually locked in’

The steel town, across the Susquehanna River from York County, has a multi-faceted history. And this terrible wreck is remembered by many today.

“One man was decapitated. Some bodies were so mangled they had to be identified with fingerprints. Dozens of victims were trapped in the wreckage; 19 people died, and 119 were hurt,” Pennlive reported.

Not ready for a trade-in: This is Chevrolet’s 100th anniversary, and this event in Hershey shows people have not forgotten this birthday. Read more: 36 classic cars featured in Hershey exhibit .

Blog post of the day: Buffy’s World profiles best of the blogs for the week: Olympics 2012 to old Springdale estate to recipes and tats