York countian seeks info about his sister: ‘Her death was a painful time’ – Linked in to history, 1/18/13 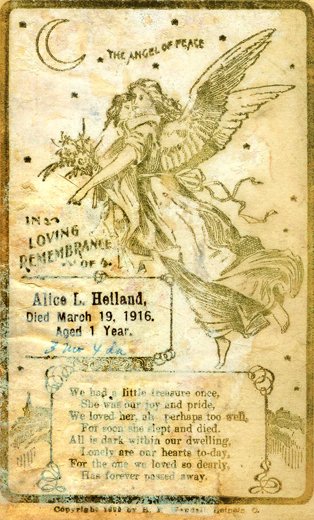 York County’s Gary E. Heiland, longtime contributor of interesting information to this blog, is looking for information on his oldest sister, Alice L. Heiland. ‘Although I was born in 1936, twenty years after her death, I have always wanted to know more about her,’ he wrote. Alice was a victim of a childhood disease. ‘Her death was a painful time for the family,’ he wrote and added, ‘Childhood diseases in that era caused much misery for people. This is a funeral bulletin for Alice, which bears no name. This suggests to Gary that it took place at home and not at a funeral home. The best information Gary has is that Alice was born on Dec. 15, 1914 and died on March 19, 1916. If you have any information, contact him at: garyprr@comcast.net. Also of interest: Simple life in York County not that simple.

Bruce Arians, named head coach of the Arizona Cardinals, is the second NFL coach with strong York County roots. (Ed Khayat was the first, coaching the Philadelphia Eagles in the early 1970s.)

Arians earned the spot after a successful interim stint as head coach of the Indianapolis Colts.

Arians attended York Catholic and then moved crosstown to William Penn, where he graduated from William Penn in 1970. He played quarterback at Virginia Tech.

New Freedom’s Ron Wolf built the great Green Bay Packers’ teams of the 1990s as general manager. But, as far as is known, Arians is the first coach. This comes about a year after York County scored its first player in the NFL Hall of Fame – Chris Doleman, also a William Penn grad. Check out this list of other NFL players from York County an

Exhibiting in Hershey: The Hershey Story Museum has an exhibit, The Childhood in Early America, through May 27. For details, check out www.HersheyStory.org.

Blog post of the day: Buffy Andrews over at Buffy’s World tells about the best blog posts of the week.

This happens only once in a generation – a York countian is sworn in to statewide elected office. Eugene DePasquale is now Pennsylvania’s Auditor General.