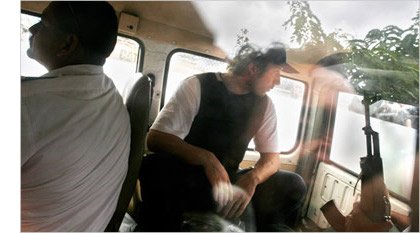 This AP photo shows Eric Volz, right, riding in an ambulance after being released from prison in Managua in December. A Nicaraguan court overturned Volz’s 30-year sentence and freed him. Volz had been sentenced for his role in the death of Doris Ivania Jimenez, 25. A Diplomatic Security agent with York County roots saved Volz from a mob after unrest followed word that he had been freed. Other York County heroes: Nazis murdered downed WWII airman from York, York County Civil War hero grandmom of Gore Vidal and ‘Chaplains: The Calm in the Chaos’.

All trails do, indeed, lead to York County.
Even from Nicaragua.
There, the Eric Volz case has evoked mob violence. Volz has been released from prison after being charged in the murder and rape his ex-girlfriend.
Volz was at risk of his life until Michael Poehlitz, special agent with the Bureau of Diplomatic Security and Susquehannock High School grad, stepped in…. .

Michael Poehlitz looked out at the mob Dec. 7, 2006, and did not like what he saw.
The special agent with the Bureau of Diplomatic Security the U.S. State Departments law enforcement and security arm stood in the courthouse in Rivas, Nicaragua, with Eric Volz, an American who had just been arraigned on charges of murdering and raping of his ex-girlfriend.
The case had generated great publicity, and anger, throughout Nicaragua.
That morning, protestors had chased Volz and his police escort from the police station to the courthouse. Their numbers grew during the day, as speaker trucks circled the city, encouraging people to storm the courthouse and kill Volz, Poehlitz said.
“They wanted this kid’s hide,” Poehlitz, a Susquehannock High School graduate, said Thursday in a phone interview from Bogota, Colombia, where he is now the regional security officer at the U.S. embassy.
“There were ten cops between 300 angry, liquored up people and me and him. It just wasn’t good odds.”
Local police ignored Poehlitz’s pleas to get more security or sneak Volz out the back of the courthouse in Poehlitz’s suit, he said. Instead, they led Volz out the front door and through the crowd.
Order quickly broke down.
Poehlitz led Volz down an alley and hid him in a gymnasium until reinforcements, which he called, could arrive.
For his efforts that day, Poehlitz was awarded the U.S. State Department’s Award for Heroism in June 2007.
The award was not announced in the U.S. until recently because Volz’s case was not resolved until last month, when Volz was released after an appeals court overturned his conviction for lack of evidence.
Volz left Nicaragua immediately after his release and is now living in hiding.
“My guess is had I not been there,” Poehlitz said, “the police would not have come to our rescue.”
Poehlitz grew up in Maryland, but his family moved to New Freedom before he started high school. At Susquehannock, he was active in the drama department, designing sets and working stage lights.
“At one time I thought I was going to study theater arts,” Poehlitz said.
After graduating in 1974, he joined the Army and spent six years stationed in Germany, where he was a military police officer. He finished active duty in 1981 and enrolled at Eastern Kentucky University.
He wound up with the Bureau of Diplomatic Security, he said, by dumb luck.
“I like the idea of overseas work,” he said. “I just put in my resume and they accepted me.”
Working in El Salvador, Mozambique and Nicaragua, Poehlitz had dealt with angry crowds, but, he said, he had never before seen one like the mob assembled in Rivas 13 months ago.
Once he and Volz entered the gymnasium, he barricaded the door and started calling local and embassy officials. They had to wait more than an hour for reinforcements to arrive.
“(Volz) was scared,” he said. “He’d been saying the whole time, ‘They’re going to kill me. They’re going to kill me. They need more people.'”
When police did show up, Poehlitz said, he and Volz punched through the gymnasium wall to escape through the back. The distraction of police arriving gave their car just enough time to escape before the mob could attack, Poehlitz said.
ABOUT THE CASE
Eric Volz was convicted in Nicaragua of murdering his ex-girlfriend Doris Jimenez in February 2007 and sentenced to 30 years in prison. Volz maintained his innocence, and was released last month after an appeals court overturned his conviction for lack of evidence.
While Volz was in prison, several of Web sites sprung up in his defense:
·http://www.friendsofericvolz.com
·http://www.myspace.com/freeericvolz
· “Outside” magazine wrote about Volz’s case this summer. The profile can be found at outside.away.com. Search “Eric Volz.”