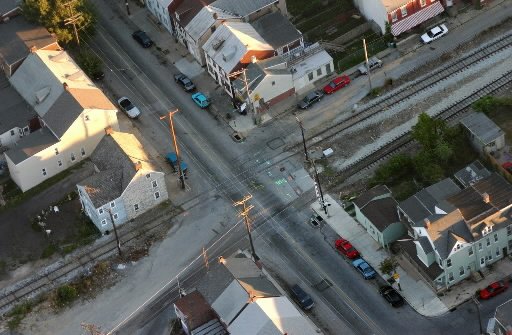 This aerial view from the camera of a York, Pa., Daily Record/Sunday News photographer shows where railroad tracks cross Newberry Street in York. Lillie Belle Allen, visiting York, was slain when the car she was riding in stalled on those tracks. Police officer Henry C. Schaad also died from a gunshot wound sustained during the same race rioting in 1969. A York College of Pennsylvania professor is looking for persons who lived through the riots who can provide an oral history of those times. Also of interest: Where do you go for the best source about the York race riots and trials?

His topic? The York race riots.

That’s a moment that some York County leaders – including probably some in the Rotary audience that day – would like to forget, so it’s commendable that he was invited to address this venerable group.

So now we have an academician studying this moment, picking up where the journalists left off.

It’s progress that a scholar from York College is focusing on those terrible days in 1968-69 when whites and blacks clashed on York’s streets and a black woman and a white police officer were slain.

Those linked to the two murders were not brought to  justice for more than 30 years. Such justice delayed does not speak well of a court system or a community.

And the riots had a cascading economic impact on the city. They expedited the flight of retailers from York. Some people still don’t go downtown because of memories of those days.

It was a major event in the history of York.

So here are some more observations about – or growing from – Peter Levy’s speech:

– York was not alone in experiencing riots in the late 1960s, Levy said. So that should lessen the self-consciousness of some about shrouding the riots, and their impact on the community reputation.

– He credited York newspapers for starting the discussion on the deadly riots and their impact. That unflinching coverage of the race riot trials in the early 2000s came despite community pressure to back off. For example, 94 community leaders wrote a letter to the newspapers,  the governor and others protesting the coverage as excessive.

– Levy wants to use the tools of academia – oral histories, in particular – to add to the historical record of this moment. This is welcomed, and may it be the start of a closer connection between scholars from our colleges and  York County topics that badly need to be explored with academic rigor.

– Is York County getting to a point that it can freely talk about a bad moment such as this? York Rotary’s invitation to Levy to discuss this topic is significant. And that an impartial academician – a holy man, as journalists often call scholars – is taking up this study could mean his findings will be received, read and accepted.

– Of course, a primary result of any study of the riots is for us to understand where we are – or aren’t – today in race relations and how that might prepare us for the future.

An accomplished person like Peter Levy’s involvement in this topic will accelerate that understanding.

A community must own its past – its story – before it can learn from it.

When Peter Levy stood in front of dozens of York County business leaders Wednesday to talk about the 1969 race riots in the city, he confessed that many in the audience probably knew more about the events than he does.

“I should probably put a tape recorder in front of the people in this room,” Levy said to the crowd inside The Yorktowne Hotel.

Levy was an invited speaker at the Rotary Club of York’s meeting.

Although Levy has taught in the department of history and political science at York College for about 20 years, he explained that he only recently started researching the riots in York.

Levy said that he is interested in collecting oral histories of people who lived through the riots.

It wasn’t until the 1990s that details about the riots in York started to surface, Levy said. He referenced the work of York’s daily newspapers, and credited them for starting the discussion.

Until then, even in books about the history of York County, the race riots got very little attention, Levy said.

And York wasn’t alone in that respect, he said.

“York’s amnesia about it was not much different from other cities,” Levy said, referring to other places where race riots occurred in the late 1960s.

Two people were killed in the 1969 summer riots: city police Officer Henry Schaad, who was white, and Lillie Belle Allen of South Carolina, who was black. Thirty
years later, the York County district attorney’s office reopened the investigations into the deaths, and charged people in each murder. Three men were convicted or pleaded guilty in the Schaad case; nine were convicted or pleaded guilty in the Allen case.

Although more information is now available about what happened, Levy said, he wants to learn more from the people who lived through the riots, and why they happened.

Fisher, the executive director of the York County Food Bank, said he grew up in the 500 block of South Pershing Avenue near West Maple Street. He lived there with his parents and sister.

Fisher recalled being the only white boy his age in the mostly black neighborhood. He was about 4 years old when the riots happened in York. Back then, people didn’t talk about what happened.

He knows now that the riots had an influence on his childhood.

“I had two groups of friends,” Fisher said. “White and black. I never fit in with either one of them.”

Levy said many people don’t enjoy exploring history’s somber moments, especially moments they lived through. But, he said, their stories are valuable.

Anyone interested in sharing their first-hand experience of the 1969 race riots in York can contact Levy at plevy@ycp.edu.

– Check out these stories and photos about York County’s black history. 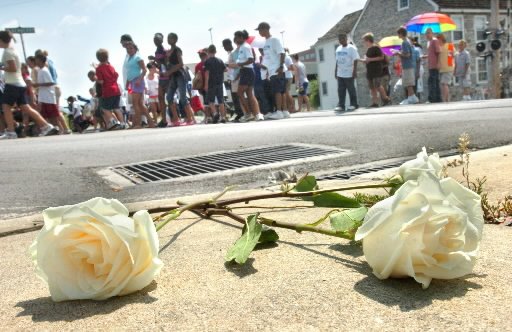 In 2009, roses rest on railroad tracks on Newberry Street during the annual Unity March. The roses lay where Lillie Belle Allen was shot in 1969.