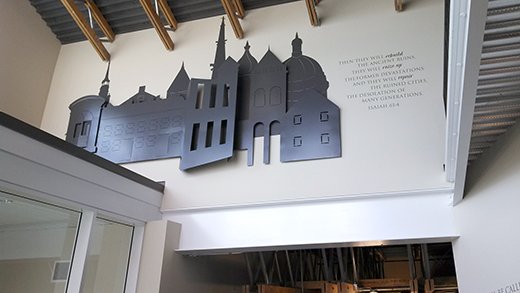 The interior of Logos Academy along the Codorus Creek in York, Pa., shows some neat features. This artwork indicates York’s skyline with the steeples central and rising above the other buildings, an apt portrait for the classical Christian school. The architects of the building used part of the tall existing structure – a former recycler – in their design. Its tower is used to house an elevator, for example. A study could be made of York’s changing skyline and what it means. First, steeples dominated the skyline in the 1700s and then government buildings went up and later smokestacks arose. Now the factory smokestacks are coming down and the towered former industrial buildings are being converted into apartments, schools and other uses in the service sector. Logos’ building is one of the most interesting in all this, kind of a retro, recyling move. It’s a Christian institution that hosts an unaffiliated church – City Church on Sundays – in an old factory building that reaches high to help form York’s contemporary skyline. Also of interest, photos of the original building, 250 West King Street: Towered Logos building west of Codorus Creek another beacon of educational progress in York. 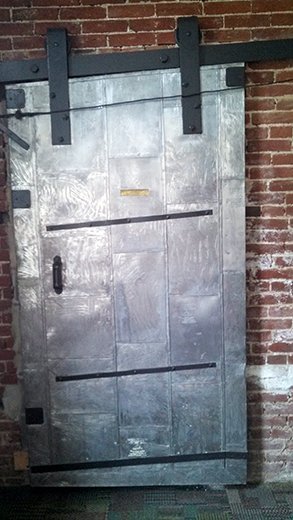 This old door is intact in the old building – occupied by Luria Rag Co. and other companies in its long history – restored as part of the design.

At yorktownsquare.com, we are always checking in with artists, whose work often captures the past and present and might even point to the future.

In that spirit, we’ll point out the work of modern master Dennis Akin’s work in Carlisle.

Touting tout: Ydr.com journalists are using a new social media tool –  Tout – that allows us to shoot 15- or 45- second videos and upload immediately to the Web. For a sample of its use, check out Sonya Paclob’s work on Tout.

This tool provides more evidence that York County has never been covered better by its journalists working digitally and for print.

More Gettysburg 150: I am adapted and updating past columns on the Civil War and York County as part of this year’s monumental anniversary.

In a recent York Sunday News, I wrote about: Focusing on Women’s roles in the Civil War.

PCN is providing extensive coverage of Gettysburg 150.  Visit http://pcntv.com/gettysburg-150th/ for information about such coverage throughout the year extensive LIVE coverage from Gettysburg on June 30 – July 3.