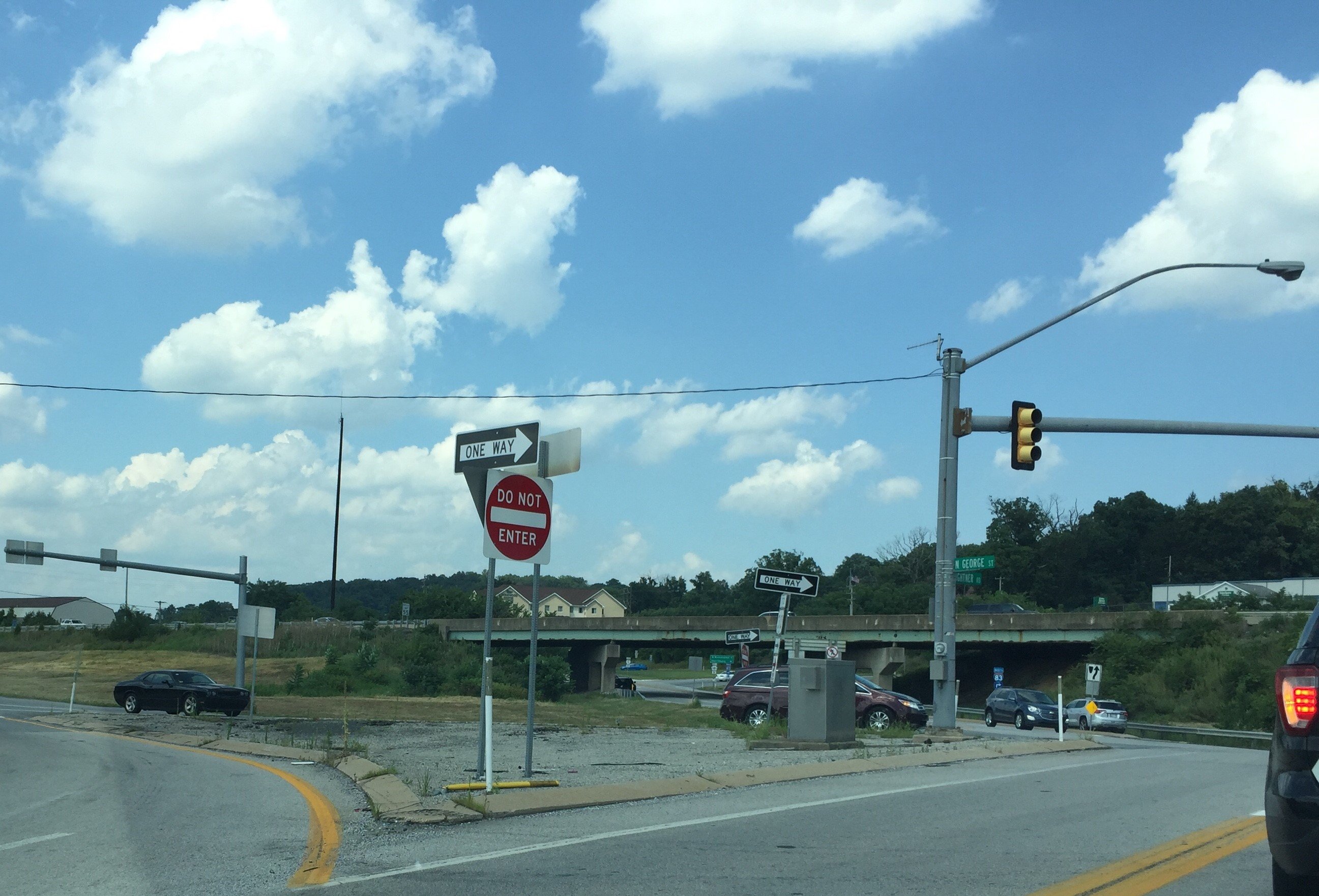 A neglected traffic island at the Interstate 83/North George Street interchange, north of York. What message is does this send to first-time visitors to the York area? (See additional photo of that intersection at bottom.)
Posted by Jim McClureJuly 28, 2019 Archives, all posts, For photo fans, Local journalism & Web, Local landmarks, Unsung/obscure sites, Wheels of York, Women's history

A bit of everything from the Retro York Facebook Group:

So much attention is given to York city’s south entrance near York Hospital that we aren’t looking at what motorists see entering from the north.

You see those weedy, gravelly traffic islands near Interstate 83/North George, that old service station near the I-83/Route 30 ramp and stuff such as the rusty utilities box at Route 30/Pennsylvania Avenue.

The latter seems easy to fix.

Either remove it or turn it over to artists, as they have done in Phoenixville in eastern Pennsylvania and elsewhere.

Tom Davidson responded with an idea on Facebook to make this more than an upgrade in aesthetics.

“I don’t see this simply as a beautification project, but a great opportunity to highlight the transportation history of York City,” he wrote.

A gift for your future self

So much volunteer love goes into curating and preserving York County history.

Paul Wolfgang is just one of many unsung heroes, as cataloguer of thousands of pictures in the York County History Center archives.

I caught him in the act the other day working on photos of World War II’s Pennsylvania Dutch Canteen, a USO operation in the old York County Academy’s gymnasium on North Beaver Street.

I have written much about the canteen, which stands today, but never saw these photos.

Paul agreed with what a former YDR photo editor often said: The best gift you can give to your future self is to put names and places on the back of photos.

For her Gold Girl Scout project, Anna Lumsargis is reaching York County women with the theme “Trailblazers of the Past and Leaders of the Present.”

She is finding women from the past and is looking for leading women today whom she can interview.

She will create an online guide, which will include video interviews.

Anna’s father, Paul, is a social studies teacher at Dallastown Area High School. Her grandmother, Maxine, was a leader in the Manchester Township Historical Society.

So, when she thanked me for helping her recently, I pointed out that her father taught one of my kids at Dallastown and other researchers and I often benefit from her grandmother’s work in Manchester Township.

That’s the way the local historical community works. We help each other.

And here are more young people steeped in history.

They come from different high schools, but local history ties them together, particularly the stories of railroads.

You will see Tate Lehman, Nate Heffner, Nathan Filak and Tristan Mundis around the station, interacting with visitors and operating the extensive model railroad platform at the rear of the old Ma & Pa station.

I asked Tristan, 16, if he would show me his five favorite artifacts at the museum.

“It was hard to choose five things. There are so many things in here that I … like,” he said.

Their enthusiasm for local history is infectious, and their knowledge is deep.

Oh, and the museum’s next open house is July 28.

Here’s a reminder that in difficult racial times in the 1960s, there were glimpses of hope in York.

The merger of the black Faith United Presbyterian Church with the large white congregation at First Presbyterian came in 1965.

Some who remember this merger are worshiping at First Pres on Sunday.

First Presbyterian’s the Rev. Allison Beaulieu responded on Facebook that her co-pastor, Kyle Gott, just preached about the courage and faith of the congregations in the merger.

“The merger is part of the ongoing narrative at FPC and is in our DNA as a church. We speak about it often,” she wrote. “It constantly challenges us to be better, do better, and always challenge the status quo. It also reminds us that our foremothers and forefathers were brave, faithful, and bold. We pray to be the same. There’s a lot of work still left to be done.”