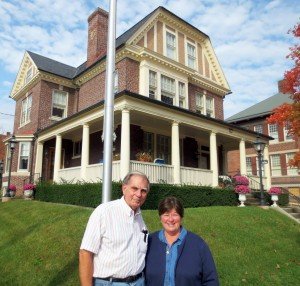 This house on 601 E. Philadelphia Street became more noticeable with the demolition of neighboring houses. The York, Pa., dwelling stood out from its neighbors in its early days – 100 years ago – and today. Here, owner Wilbert Brown and Lynn Fry Custis, granddaughter of the original owner, are seen at the house. Also of interest: This York City house was not a church or Masonic Lodge, it was a house.

People love that, evidenced by the heavy response when I posted a column to days ago on another York City house of note – the Menough house.

So that reminded me of a house he profiled on Nov. 18, 2012 – let’s call it the Fry-Brown house at Philadelphia and State streets.

You have driven by it hundreds of times.
Now, the house at 601 E. Philadelphia St. — on the northeast corner of Philadelphia and State streets — is even more visible with the demolition of the homes between it and the Helen Thackston Charter School (formerly the Ridge Avenue School).
And you probably asked yourself: “What is a house like that doing there?”
Quite simply, the impressive home is out of place on that block.
More surprisingly, the home celebrates its 100th birthday this year.
The house was built in 1912 by William Fry, a surveyor and Notary Public who was also involved in real estate and making loans. An old, wood sign to that effect is in the basement of the home. Although of a Dempwolf-like style, there are no records at the York County Heritage Trust to indicate the home’s architect was a Dempwolf.
Fifty years ago — November 15, 1962 — Wilbert Brown purchased the home from the Fry family. That makes him only the second owner in 100 years. When he bought the three-story, brick home in 1962 for $7,000, Brown was only 23 years old. The house was in need of work, but Brown did not realize it would take him almost 50 years and a lot of money to bring the home back to its former glory.
Wilbert Brown was supervisor of buildings and grounds for the West York School District for 35 years, so he had the expertise to do much of the restoration and adaptive renovation work himself.
Today, the home is a gem both inside and outside. The front porch wraps around two sides of the house. Wilbert has been told the backyard of the home is above the State Street (originally named Vine Street) level because that is where the earth from the basement excavation of the house was placed when it was built.
Wilbert has added many of his own touches to the home, but it still retains its original ambiance. The front entry and foyer has marble flooring reflecting light from the original lighting fixture. Double pocket doors into the living room were replaced with identical doors with oak on one face and poplar on the other.
An oak stairway leading to the second floor has its original, curved brass “dust corners,” which made it easier to clean the steps.
The coffered ceiling in the dining room features a crystal chandelier Wilbert ordered from Europe.
Throughout the house, Wilbert has added recessed and special lighting. The original stained glass windows glow at night.
The bedrooms on the second floor are just as impressive with a mini-kitchen in a former closet. There is a large room on the third floor.
Brown, who is single and turns 75 in February, says, “I knew what I was getting into” when he began the renovations. He just didn’t think it would take him so long. But, then again, he took the interior walls down to the brick and had all the walls re-plastered. Looking around the home, he adds, “it has a lot of history to it.”
William Fry’s granddaughter, Lynn Fry Custis, agrees. “There are a lot of memories here: Thanksgiving, Christmas in the house,” she said on a recent visit to the house from her home in Fayetteville. “I remember my grandmother baking pies to take to the neighbors.”
The house may look out of place on the block, but it definitely has a place in the hearts of Wilbert Brown and William Fry’s granddaughter.

Check out these posts that touch on Dempwolf designs.