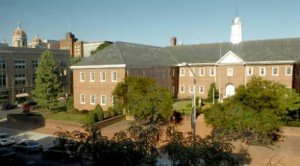 This longtime York Federal/Waypoint/Sovereign Bank Building on York, Pa.’s, South George Street is being transformed into York’s City Hall. The city’s choice of this visible venue presents an interesting cultural irony. The Colonial-style building promotes York City’s 18th-century past particularly the richness of its American Revolution history. But much of York’s renowned building and housing stock comes from the Victorian era and its aftermath, meaning 20 years on either side of 1900. This was the period of York’s greatest growth, with the building of all its red-brick factories and row homes for the workers who toiled in them. In that respect, the current West King Street City Hall, built in the 1940s, comes a bit closer. That building will become the city police station. York City offers a big tent of architectural styles but relatively few buildings from the American Revolution era. Despite its appearance, the new city hall is less than 50 years old. All this points to a problem York has experienced in marketing itself. It offers accomplishments from every historical era but not a marquee event or moment to tout. (Click on photograph to enlarge.) For a discussion on this marketing challenge, see: ‘Time for York to break shackles of Colonialism’.

It’s not too late to sign up for my four-week OLLI course “World War II: The Effect on York County.” It’s set for Wednesdays starting Feb. 15, and the second Wednesday we’ll tour the York County Heritage Trust’s “Front Porch to Front Line” exhibit.

The last Wednesday, WW II vet Charlie Slenker will tell of his war experiences for part of the class.

One thing that strikes you about OLLI classes is that members are positive and upbeat. They want to be there, and they want to learn. The OLLI saying “The Place Where Curiosity Never Retires” is right on.

I’m hearing 32 folks have signed up for the course, and we can take up to 40. Contact the Osher Lifelong Learning Institute office, 771-4015, for details.

Interesting stuff for sale: George Taylor, signer of the Declaration of Independence from Pennsylvania, was about as obscure as York County’s signer James Smith. But his name lives in the form of a rare letter, available for sale at a current RR Auction running through Feb. 15.

The New Hampshire-based auction house says that Taylor was the only ironmaster to sign the Declaration and worked his trade all his life as demonstrated in this letter.

Interestingly,  James Smith was an ironmaster, too, or at least owned Codorus Furnace for a period. But he was better known as a lawyer. For details, contact:  www.rracution.com

Goldsboro in the news: Greg Gross, the Philadelphia Phillies batting coach and York County native, is up for nomination for the Phillies Wall of Fame. Fans of the former Goldsboro resident can aid his bid by voting at the Phillies site.

This comes after another former countian, Chris Doleman, gained the nod for a spot in the National Football League Hall of Fame.

An example of a post: In On being a lawn junkie, he argues that those serious about their lawns deploy lawn ornaments. York countians must love their lawns because such ornaments are all over the place.

Forum of the day: And here’s another new blog on yorkblog.com: Fix York County.  Here’s its description: “Welcome to the Complaint Dept. Have a pet peeve about your community? A quality of life issue that’s driving you nuts? Terrible roads? Nasty potholes? Crime problems? Improve York County by flagging problems for us to investigate and help resolve. We can’t promise your problem will be fixed, but we can shine a light make to sure local officials are aware of it. Use the map at left to report issues. Or email us at letters@ydr.com.”

Yorkblog.com is a robust place where bloggers embrace on a wide variety of topics. Community bloggers and YDR staffers are writing so winsomely that they generate 225,000-plus page views a month. Yorktownsquare.com is proud to be a charter member.