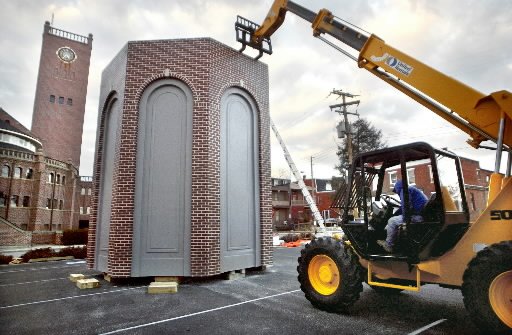 A steel and fiberglas cupola is guided onto its base at the top of the tower of Zion UCC in York in 2002. The reproduction of a cupola removed from the church in 1974 houses antennas for PCS One. The original cupola (see photograph below), taken down after a structural analysis, had open windows and a bell, which is now inside the church.

Did you know the tower of a venerable York church hides all kinds of high-tech gadgetry?
It’s a bit of a story so read on.
A recent post featured four towers from the 1800s captured by artist Lewis Miller.
One of those steeples, that on the German Reformed church, went down wihen the church was demolished in the early 1900s. Its successor, Zion United Church of Christ, went up facing Penn Park. (Trinity United Church of Christ is the other direct successor to the German Reformed church’s, but that’s another story, actually a Civil War tale.)
A cupola sat atop the church’s tower until it a lightning strike prompted its removal in 1974.
Move ahead 30 years. … 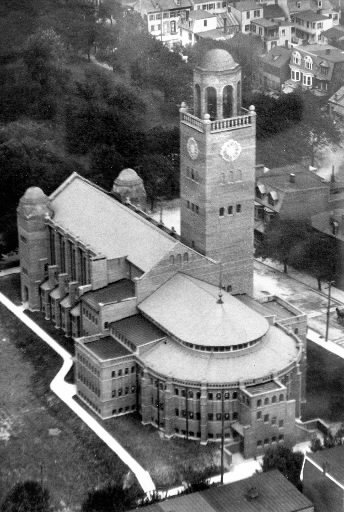 This is how Zion United Church of Christ looked before 1928, showing the cupola on top of the tower that was removed in 1974 after a lighting strike.

A cell phone company approached the church to use its tower to install antennas.
The result was installation of a replacement cupola in 2002 to hide the communications equipment, a process known as stealthing.
For more, read still further:
From the York Daily Record:

Sometimes the Lord works in mysterious ways.
In 1974, a bolt of lightning struck Zion United Church of Christ in York, causing a few bricks from its cupola to break away.
A member of the congregation who happened to be a contractor had a crew of men check the structure to see if it was safe. The report came back that it was not. So down came the cupola.
As the workers were taking apart the dome, they realized that the lightning did not cause as much damage as they originally thought. The cupola was safe, but by then it was already too late. The cupola had to come down.
Over the last 28 years, members of the Lafayette Street church have tried to think of ways they could get back their cupola.
Leonard Grove, property chairman at Zion United Church of Christ, and a fellow church member tried reaching out to cellular phone companies to see if they would be interested in helping out.
At that time, Grove could find no takers, so he dropped the issue, he said.
Then one day his pastor, the Rev. Robert Anderson, was sitting in his office when the phone rang. It was a man from PCS One.
He wanted to know if the church had any theological problems with the company putting an antenna on their building, Grove said.
The church did not, Grove said.
Mike Schwartz, vice president of network engineering, said PCS One needed another base station site in the York area to take care of coverage issues.
The Lancaster County company was looking at a small geographic area and happened to find the church sitting smack dab in the middle of that area.
“The church turned out to be wonderful,” Schwartz said.
Church members showed company officials an oil painting of the church that was made shortly after the church was built.
Company officials decided to recreate the cupola and hide all of their equipment inside. The process is called “stealthing,” Schwartz said.
This project is not the first time that the company has erected antennas that people could pass without noticing.
Schwartz pointed to Gettysburg’s Lutheran seminary. The company did a “stealth” project there, too.
“It’s totally invisible,” he said.
Stealthing antennas are more expensive than building antennas out in the open, Schwartz said. He declined to say how much the Zion United Church of Christ project would cost the company.
“It’s what you do for your business,” he said. “It costs a lot of money to lose a customer.”
The antenna was needed so customers would not hear a busy signal when they hit the send button on their cell phones.
After 28 years with no cupola, the church will be getting a new one Wednesday. The eight-sided structure is 30 feet tall, weighs five tons and is made out of fiberglass.
The cupola will be put together in the church’s parking lot this week and is expected to be hoisted on top of the building with a crane.
Grove and the church could not have asked for a better solution to their cupola dilemma.
“We’re glad it worked out the way it did,” Grove said.
“It’s not going to cost us a cent. The phone company is going to pay for everything. It’s going to be a big thing for us.”