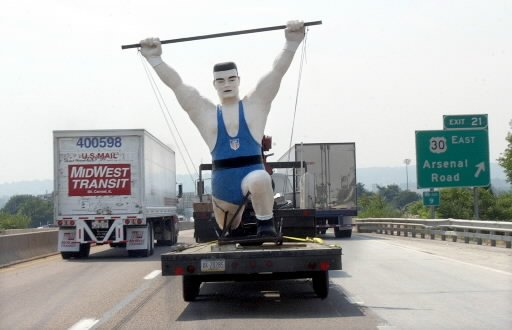 The Barbell Man at York Barbell is back from rehab and hoisted to it normal rotating perch greeting motorists along 83. This York Daily Record/Sunday News video shows his ride to his stand atop York Barbell. Also of interest: All York Barbell posts from the start and Obscure F.O.E. building to become colorful beacon of York, Pa.’s renaissance and Who were most prominent 20th-century sports heroes in York and Adams counties?

The York Barbell Man is one of York County’s most memorable landmarks.
But he’s been a bit long of tooth recently.
The man was removed recently for repairs after he began coming apart at a seam around his lower torso, specifically around the seat of his pants.
He was rewired and hoisted back in place.
Here are some specifics about the statue:

Also of interest:
Check out this photo of the York Barbell man losing one of his weights.