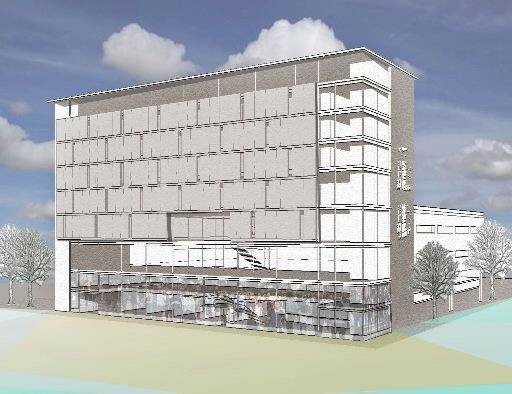 Architect Murphy & Dittenhafer’s rendering of what the York (Pa.) Museum of Art (YOMA) could look like if the idea put forth by the Brenner administration comes to fruition. (See photo of site below.) Background posts: Temporary river art collection may find permanent home along Susquehanna, Resources for York/Adams history junkies increasingly posted on Web and To those seeking to donate York County artifacts to preserve and present history.

The proposed York Museum of Art has intriguing hooks.
Organizers are:

– Tying into the Central Market, which appears to be gradually losing its crowds and badly needs a shot of fertilizer.
– Open to securing and displaying the work of Jeff Koons, York County’s internationally famous artist.
– Considering a structure of perhaps nine stories, making it one of York’s tallest buildings.
– Open to displaying historical art from York’s masters – Lewis Miller, William Wagner, Horace Bonham Horace Bonham as well as pieces from the Visions of the Susquehanna collection, proposed for display at a site in Long Level.
As usual with museums, the most severe challenge for the project is not in building it. The increasingly difficult trick is keeping it going after the grand opening.
Jennifer Vogelsong’s story in the York Daily Record/Sunday News (5/9/08) explains the “triple gateway” project:

The York Museum of Art will be more than just an art museum, those involved in the project say. And while you won’t see groundbreaking ceremonies anytime soon, it’s expected to become a reality much faster than Sovereign Bank Stadium did.
Mayor John Brenner introduced the York Museum of Art, or YOMA, in early April during his State of the City address, billing it as a redevelopment priority for the city, along with renovations to Central Market.
Plans are to build the museum on the Central Market parking lot at West Philadelphia and North Beaver streets, diagonal from the market. While permanent art exhibits are part of the project, planners envision YOMA as more of a creative incubator and economic stimulant.
“The art center portion is 10,000 square feet bigger than the museum part,” said Kevin Lenkner, director of YorkArts. “That’s a pretty crucial distinction.”
Lenkner doesn’t know if YorkArts would move its operations to the new building or establish a satellite operation in YOMA and keep its space at 10 N. Beaver St.
“We definitely love the space we’re in now, but we’ve definitely outgrown it,” he said. “We have a nice street presence, but our classroom space is full, and we have more requests for community-related exhibits than we can accommodate.”
Chasing cash
Whether, how much of and when YOMA becomes a reality depend largely on money.
The CODO development group has committed to building privately financed residences on the top floors of the building if project planners want that, said Eric Menzer, senior vice president with Wagman Construction.
But first, the city must secure state funding, which would likely require fundraising for a local match.
“(YOMA) is one of our top priorities in terms of capital budget funding,” said Matt Jackson, York city’s economic development director. The city plans to request $25 million from the state for the YOMA/Central Market project.
The timeline for breaking ground and opening YOMA depends on how much money the city can cobble together and how quickly it can do it.
“It’s really about the financing piece,” Menzer said. “Once a site is nailed down and the money is available, things tend to go quickly from there.”
Lenkner said the project won’t happen in a year. But nor will it be the epic saga that Sovereign Bank Stadium was.
“There are no eminent domain issues here, and from all the meetings I’ve been in, everyone is very positive about this,” he said. “The idea for this existed before the building was proposed, so it’s not like we’re selling something new.”

Looking up, ahead
Jackson said the choice of a site for YOMA was easy once it became clear that there wasn’t an existing building in or near the designated cultural district that could be easily and inexpensively retrofitted for the project.
“This is a logical spot because it’s a triple gateway,” he said, citing nearby Sovereign Bank Stadium and the Northwest Triangle. “The more clustered the energy is, the more diverse the flow will be.”
Because the site footprint is only about 200 feet long and 50 or 60 feet wide, YOMA will be built up, not out. And it could rival the judicial center and the Yorktowne Hotel as the tallest buildings in town.
Frank Dittenhafer, a YorkArts board member and architect with Murphy & Dittenhafer, said it didn’t start out that way. About nine months ago, he drew a sketch to represent ideas he’d heard people talk about for months. He showed it around at meetings, asked for comments and refined it several times.
Because 22 to 24 apartments are considered the necessary critical mass for a residential portion of the project to work, the proposed building ended up being nine stories tall.
Jackson said the building will be a prototypical urban model. “And when you look at urban models, you need to look up.”
Logistics
Because the project is in its infancy, there are plenty of questions yet to be answered about YOMA.
Would the museum buy or rent the land from Central Market? Will the parcel be subdivided? Will the two entities join somehow?
How will parking be handled? Will the parking deck behind the YOMA site become a parking garage?
Dittenhafer said his design has much of the building’s façade facing south to capture solar power with photo panels so the building could generate much of its own electricity. He’d like to see a green roof and the latest environmentally friendly technologies used in construction of the project so that YOMA would be the greenest building in the city.
“York’s historical heritage is so strong, I think this would be a wonderful balance to that,” he said. “It would show that we’re also a community that is progressive and interested in growth as well.”
Lenkner said he’s excited about the possibility of a fine art museum in York.
“It’s something that other communities have and we’ve had a need for a long time,” he said. “But it’s hard to know if you want something if you haven’t had it in the past.”