York Area Sports Night at 50: ‘I want to put on a show for children to meet their heroes’

Brooks Robinson has visited York County many times, including a visit in the 1950s in which he made his professional baseball debut. York Area Sports Night brought him here in 2005. Here, he acknowledges Sports Night fans in at Central York High School. Also of interest: Among recent celebrity visitors, Brooks Robinson topped them all.

Area non-profits are increasingly calling on celebrities to raise money for their organization.

But York Area Sports Night has been at it for 50 years at its next annual event, set for Feb. 6.

George Trout was a young radio man when he got the phone call 50 years ago.

On the other end was Sam Shipley, head of Shipley Oil, a York mover and shaker.

When he called, you dropped what you were doing.

And he wanted to start a sports entertainment show in town. Harrisburg and Lancaster had versions of that. He wanted his to be different.

“I want to put on a show for children to meet their heroes and get their autographs,” he told Trout, then the sports director of WORK radio.

One thing very quickly led to another and the first York Area Sports Night was held the following year at William Penn High School. It was headlined by Olympic star Jesse Owens and NFL legends Lenny Moore and Johnny Unitas.

It’s survived by moving venues, changing formats and weathering the inability to afford top-line talent like it used to.

It survived by turning its reliability and reputation into a tradition.

And it entertained generations quite like nothing else around here. The stories still do.

Like the show when Billy Jean King played tennis with a local guy in the gym. Or when Bob Cousy played a dribbling Houdini against a team of kids.

Larry Holmes Double Dutch jump-roped. A horseshoe-pitcher threw 10-straight ringers — with Trout straddling the stake for effect, and praying on each toss.

Lately, it’s been up to Trout (all 50 years) and Mike Harvey (at least 35 years) and their younger associates to re-shape the event enough to keep it going.

And so the 50th version on Feb. 6 will be at the Heritage Hills Golf & Conference Center. There will be autograph sessions and a meet-and-greet and a dinner and some emcee-celebrity banter.

Gone are the demonstrations with trick-shot basketball kids and gymnastic daredevils. Long gone is the wow-factor, with a Ted Williams or a DiMaggio or even a Ripken.

Actually, it’s pretty impressive that they still get people coming through the doors.

Like how they snagged Michael Phelps before anyone knew him at the Olympics. And how they’ve hit the sweet spot over and again with local celebrities, like this year with Maryland head football coach Randy Edsall and Arizona Cardinals head coach Bruce Arians.

Consider this, too: Baseball history doesn’t get much better than Jim Bunning, the Hall of Famer who will make his first Sports Night appearance. He was a Phillie. He was a U.S. Senator.

“I’m always amazed at the stuff people bring (to get autographed),” Harvey said. “Somehow, someone will show up with a program from that game.”

Meanwhile, Sports Night officials still give out Shipley Awards to local athletes, as well as a $1,000 scholarship.

How much of anything lasts that long?

“Part of it was a handful of guys like myself who promised Mr. Shipley that we’d do what we could to keep the thing going,” said Trout, 85 in March. “Then we promised each other to keep it going.”

It’s more than that, though. Enough people get giddy about chatting with a load of Penn State football players, like last year’s show. Plenty are intrigued by athletes who went to their high schools and made it big, like Arians and Green Bay fullback John Kuhn.

Because the NFL is the NFL.

And the Hall of Fame is still magical enough. 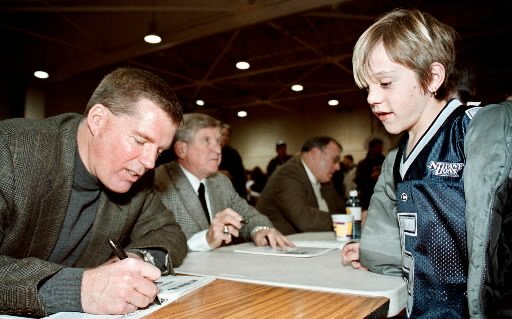 Randy Edsall, left, was a Sport Night celebrity in 2003. Edsall, now University of Maryland football coach, will at the 50th Sports Night this year.