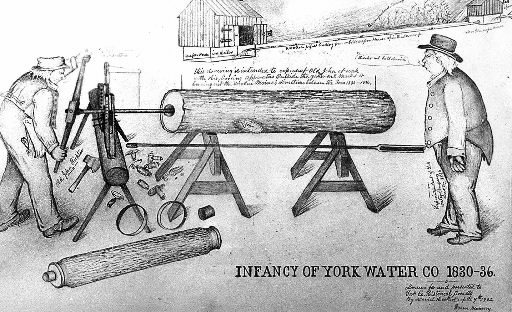 The York Water Company initially used 10,000 feet of bored logs to transport water to users after it had flowed from springs near Baumgartner’s Woods to a reservoir in southeast York.

So, the arch near Arch Street turned out to be a sewer line.
A big sewer line. (For background, see York’s rail stations scored moments in history.)
And no, it didn’t connect with the Underground Railroad. The Underground Railroad, believed to be active in York, did not run underground. Those traveling just seemed to disappear that way when the trail of runaways grew cold with slave catchers from the South on their heels… .

The arch’s connection with sewage is the interesting part here.
Not that sewage is interesting, but the arch’s presence is a reminder that raw stuff drained into the Codorus Creek even from the 1700s.
Household sewage certainly found its way there. But other contributors were tanneries, forges and farms.
Indeed, after the York Water Company was formed in 1816 to transport water from near Penn State York, York was able to tout to the world: “Fresh wholesome water has been conducted into town this summer, in pipes, a distance of two miles.”
The arch is a reminder that the “Inky, Stinky” Codorus has been since the 1700s. Well, at least stinky. 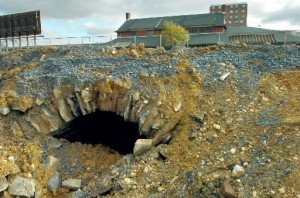 This stone arch, part of a sewer line, was later demolished to make way for Sovereign Bank Stadium.