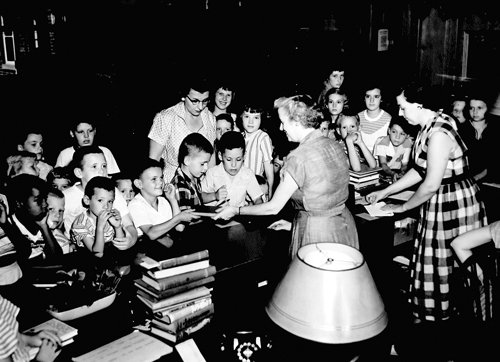 The headline on June Lloyd’s recent blog post presents an issue that we should consider today: Why York doesn’t have a Carnegie Library.

In 1900, Andrew Carnegie offered $50,000 for such a building in York, if the city would come up with $5,000 a year to operate it. The York Press might have influenced leaders not to accept the grant, the blogger wrote.

“Even though the York Press doesn’t come out and say it isn’t needed, they must have certainly influenced some people against the plan by pointing out that taxes would rise and that a public library room would soon open at York High,” June wrote.

York would wait 35 years before a designated library opened with the Great Depression building of Martin Library.

That’s late for a community to get a library, considering that Carnegie had been seeding such for decades.

Add to that the fact that York didn’t have a four-year college until 1969, and you can only conclude that York was late in receiving all the benefits of books and academia that libraries and colleges give to a community. York College of Pennsylvania opened its doors at its current location in that year.

Compare the college’s presence to that of Lancaster, where Millersville became a college in 1927 and Franklin and Marshall decades before that.

So it comes as good news that State Rep Kevin Schreiber has called for the creation of a collegiate advisory council.

About 10,000 students in York area are attending post-secondary schools.

That 10,000 figure is impressive, and the more those students get to know the city,  the more York will be enriched – and least of all in a financial sense.

Still, one can’t help but to wonder how York would be different if it had started earlier to value books and reading.