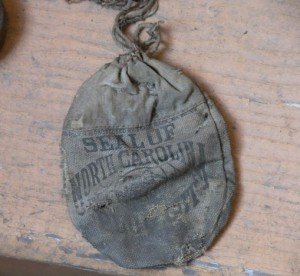 The West Manchester Township and Greater Dover historical groups recently visited the Yingling Farmhouse in Gettysburg. This is one of the items found within the 1860 farmhouse now being restored. Also of interest, another mysterious artifact: Torpedo, bomb loader, made in York, Pa., turns up in Tennessee museum.

Wish we had more York countians like Jo Ott.

Such as some of the artifacts she viewed as part of a group from the  Greater Dover and the West Manchester Historical Societies who visited the Yingling farmhouse near Gettysburg.

“Here’s another one for you to ‘chew’ on,” she wrote in an email.

“While there we were shown several old items the construction crew found inside the house. Photo 620 is of an old tobacco pouch; 623 shows two medical devices and a tin of witch hazel; and 624 is an old razor and case.

“My email was referred to Dr. Joseph C. Porter, Chief Curator, at the North Carolina Museum of History where RoAnn Bishop, Curator of Agriculture, Industry and Economic Life at the museum sent me a photo of a bag like the one found at the Yingling farm house.

“Now able to read fully the printing on the bag and learn that ‘The Seal of North Carolina’ is the trade mark/brand of a chewing tobacco and not a one time seal of the State of North Carolina, I wanted to know more about the Marburg Bros. company.

“From various websites, including the Cigarette Pack  Collectors Association’s: 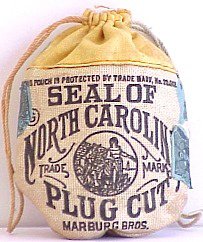 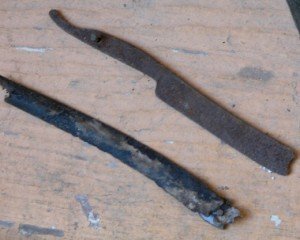