Remember this: New Salem is the borough. York New Salem, the post office

Marlin Barshinger posted this photo, owned by J.B. Fishel’s Bakery, on the reader submitted Your Photos section of ydr.com. The collectible points to the fascination many York countians hold to the hobby of finding old bottles. Former privies – outhouses – provide a prime source for such discoveries.

Notice also the use of the address for Jay-Bee Farms – York New Salem. York New Salem, of course, is the name for the post office for New Salem borough. York County has had a borough called New Salem since 1876, although, like Jay-Bee, everyone calls it York New Salem.

New Salem borough also has had another identity crisis: As late as 1950, a local publication referred to it as Neffstown, Nesstown or Nacetown, according to ‘Gazetteer of York and Adams.’ 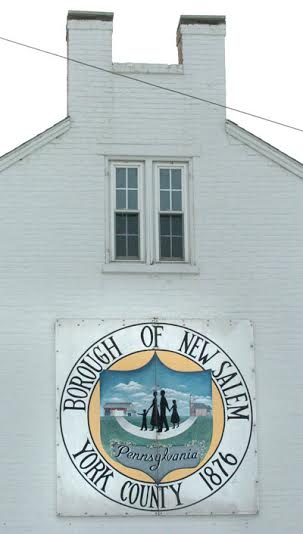 The story was about a minor brush fire on Quarry Road in Peach Bottom Township.

It was in the area of Slateville Road and Guppy Valley.

The bible for such things, our previously -cited “Gazetteer of York and Adams Counties,” doesn’t list Guppy Valley.

Anyone know how that name came about?

Remember Jacque? World War II vet Jacque Meeker,  known to many in York County including readers of this blog, has died. One of his great moments was meeting York native Jacob Loucks Devers in Europe. Here’s his story as told in the yorktownsquare.com blog post: About York, Pa.’s Gen. Jacob Devers: ‘He would have been thrilled to meet the lt. of the first POW camp he had freed’.

Shout out: Tom Wolf from the Wolf Organization gave a shout out about our recent blog post on his company’s new strategy. Tom is a blogger, too, and he commented on our comments in: Build Your Business.

Recent comments: Readers have been active in commenting on this blog in recent days. It helps that we fixed the commenting function in past two weeks. Check out “Recent Comments” in the right rail (side) of www.yorktownsquare.com. And feel free to make a comment on any post.

Blog post of the day: Mack the Fire Horse has captivated folks from around here for years. Joan Concilio, in Only in York County, gathers stories about the faithful horse.

Forum of the day: This is just interesting. People are commenting over at the Exchange on the end of the road for the “Maid of the Mist” at Niagara Falls.