YDR photog: ‘Best video is often the least planned event for video’ – Linked in to history, 12/21/12

Ydr.com photographer Paul Kuehnel has posted on the Look blog his top videos of the year. “Top” does not mean easy or fun. Here’s Paul’s description of this video, ‘Mitchell Stambaugh talks about when he first heard his son (Cameron) was killed in Afghanistan’: ‘Family talks from their heart in front of memorial for their son at their home a few hours after they learn he was killed. It isn’t often that a father can express the moments when he saw two soldiers walking up his driveway.’ (See the YDR’s Eileen Joyce’s top photos below.) Also of interest: Navy SEAL Neil C. Roberts: ‘In this simple grave … lies a national hero’.

Paul Kuehnel, in listing his favorite videos of 2012, gives a bit of background about the multi-tasking world of today’s photographer:

“When a newspaper photographer had one task, shooting still photos, finding peace with your work was much easier. You gave everything to shooting great still photos.

“In the fragmented world of a multi-platform journalism, excellence is diluted between shooting stills, shooting video and taking time out to of that split to spit out a few fragments for immediate web updates. I tend to give video the most attention while multitasking, so choosing between the 120 shorts I produced this year was difficult. I love them all.

“The best video is often the least planned event for video, the most candid, when you have one and only one chance to catch people being real.

So to get a final look at this exhibit, the most high-tech ever at the trust, visit the museum from 10 a.m. to 4 p.m. Saturday. Details: yorkheritage.org.

Forum of the day: Exchangers can discuss whether they’ve ever observers the Glen Rock Carolers at “work.” 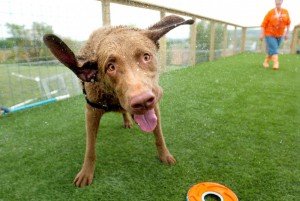 York Daily Record/Sunday News’ Eileen Joyce listed this image of Remington, a Chesapeake Bay Retriever and a dock dog, as her favorite of 2012. Read about this photograph at ydr.com’s Look blog.