York Daily Record columnist James A. Hubley: ‘What I prefer is a simple, Jim’ 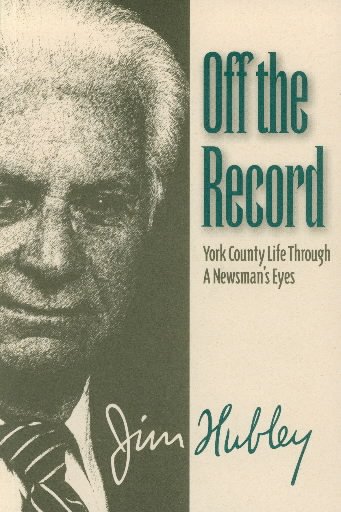 Since learning last week that York Daily Record columnist Jim Hubley was near death, I’ve been thinking about how to remember the man in a few words who had written so many in his 68-year career.
Then I remembered the introduction of his book “Off the Record” that I always felt typified his direct writing style, which typified this direct man.
So, I’ll let Jim Hubley describe Jim Hubley:

My full name is James Alexander Hubley.
When I write or endorse checks, it is James A. Hubley.
When well-mannered children or ill-mannered bill collectors address me, it is Mister Hubley.
When former schoolteachers or census takers hail me, it is James.
When aging relatives or long-time friends greet me, it is Jimmy.
What I prefer is a simple, Jim.
Simply, then, the terminating line of this syllogistic identification is: This is a book by simple Jim Hubley.
Rather, it is an assemblage of some columns from among the 1,300-plus which I have written and were published in the York Daily Record between January 1, 1971, and December 31, 1993. Columns written and published in the York Daily Record since that latter date have not been included in this volume.
The book’s title, “Off the Record by Jim Hubley,” comes from the original logo under which the first column appeared in 1971. That logo has undergone several changes in the intervening years. “Off the record” is an expression heard many times by media persons from individuals wising to volunteer information without disclosing the source of their news. Also, “off the record” closely identifies the column with the Daily Record newspaper.
That sums up the “what” of this book. The “why” is an attempt to answer two questions asked many times by kind readers.
They asked, “Why don’t you publish a book with some of your columns?” and “Where do you get your ideas for them?”
To oblige, herein are some of those columns, each supplemented with a little explanation as to what inspired their writing. Also noted is the original date that particular column was published in the Daily Record.
A number of photographs are included within this book, which I trust will make reading it a bit more enjoyable.
My fervent wish is that you will enjoy the book as much as we enjoyed writing and putting it together.
Thank you.

No, thank you, Jim.
Other York Town Square posts drawing from Jim Hubley or his work:
– ‘We would ‘hex’ them if they ignored us’
– Giving news, sports junkies their fix
– Bury’s burgers: ‘That was it — no slaw, no relish, no pickles’.
– ‘That’s a stupid question;’ Brooksie played second base.
– Butch Wynegar ranks bright among York’s sports stars.
– York County, Pa.’s Cameron Mitchell agonized over career choice
– Playland plays nostalgic note for York countians