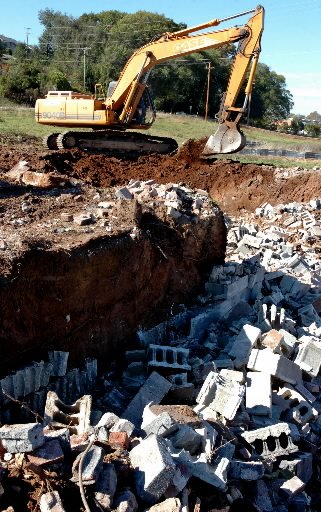 This is all that remains of the former WSBA radio building along the Susquehanna Trail in Manchester Township. Susquehanna Real Estate, the building’s owners plan to build a business center at the site. For more on the demolition, see story below. Background posts: 101 Ranch Boys hooked musician and Story on famed 101 Ranch Boys spawns memories.

The original home of WSBA Radio is no more, knocked down for commercial development.
The colonial-design building was the original home of York’s second radio station, occupied upon its completion in 1942.
Some facts about WSBA, gleaned from Philip K. Eberly’s “Susquehanna Radio, the First 50 Years:”

Years of operation on that site: 1942-1975, when the station moved to its current home near Wrightsville.
WSBA organizers: Otis B. Morse IV, announcer and program director; Willis Weaver, engineer; Louis J. Appell Sr., Pfaltzgraff Pottery Company and longtime theater owner.
What does WSBA stand for: Perhaps Susquehanna Broadcasting Authority or perhaps arbitrarily assigned by FCC.
Building designer: C.S. Buchart, York architect, modeled after a Charlottesville, Va., station.
First York station: WORK, where Morse and Weaver previously worked. WORK started in 1932, joining the York Little Theater, York Chorus, Martin Library, Valencia renovation and York Symphony as entertainment and recreation venues kicking off during the Depression.
Otis Morse’s comment about makeshift offices at Pfaltzgraff factory: “It was a litle hard to keep in mind that you were working there for a radio station that was taking form out on a beautiful meadow in York, RD 5, when you were surrounded by pottery dust.”
Grand opening: Eberly: “Wartime conditions dictated a low-key WSBA opening day ceremony… The last minute-realization that the station lacked an American flag to raise during the ceremonies sent an employee scurrying to the local Sears, Roebuck store.”
TV time – Starting in 1952, WSBA-TV, an early UHF station, operated in a facility south of York that is home to the local Fox affiliate, WPMT-TV.
The York Daily Record story on the demolition:

Earlier this week, a local radio landmark was razed to make room for a planned business center on North Susquehanna Trail in Manchester Township.
Next spring, Morgan-Collins Realtors and Janney Montgomery Scott are each expected to open locations at Susquehanna Real Estate’s 11,691-square-foot Trail Business Center, said David Bode of Rock Commercial Real Estate in York.
Construction of the center, which will sit on property that once housed WSBA radio’s main offices and studio, should begin soon, said Jack Kay, president and chief executive officer of Susquehanna Real Estate.
As a teenager in the 1940s, George M. Trout would volunteer at the station as a member of a local radio club.
During those years, all the station’s shows were live, including popular acts such as the 101 Ranch Boys, a country music group.
Eventually, Trout, a former York County Commissioner, started a career with WORK, a competing radio station in York.
From time to time, Trout said he would stop by the WSBA station to visit friends.
“To me, the WSBA station was more of a landmark,” he said.
The station continued to be WSBA’s main home until February 1975 when Susquehanna Pfaltzgraff consolidated both WSBA and WARM-103 into a new building in Hellam Township, Kay said.
After the move, Susquehanna Pfaltzgraff used the studio and offices for other company functions and leased the space out to tenants, he said.
About two years ago, Susquehanna Real Estate bought the WSBA building from Susquehanna Pfaltzgraff with the intention of eventually developing the property, Kay said.
Recently, Cumulus Media, the current owner of WSBA radio, relocated a transmitter located at the building closer to the towers situated to the rear of the property. That shift cleared the way for the demolition of the former WSBA building and the development of the center, Kay said.
As the project moves on, Bode said he will search for another tenant or tenants to take up the remaining 2,880-square-feet of the space.
Andy Collins of Morgan-Collins Realtors said the new office will be the firm’s third York County location.
Collins said he plans to hire 18 agents to staff the office.
“There are no other real estate companies in that area, and I thought it would be good location to open,” he said.