Dallastown woman wrote to the big man himself, and Jerry Ford responded. Linked in with neat history stuff, Jan. 2, 2012 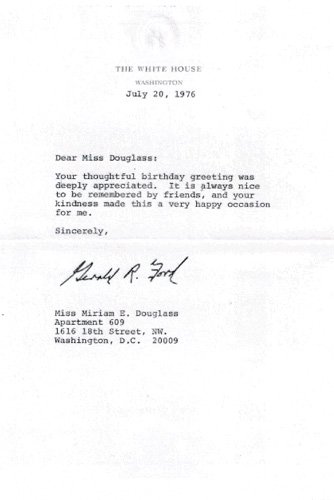 Many York countians no doubt have received letters from a U.S. president in response to a complaint, a public policy matter – or in this case, a birthday wish. York countian Lance Wolf provided this letter from President Gerald Ford to Dallatown’s Miriam Douglas in 1976. It was just an ordinary exchange  – a form letter – after Miriam wished the president a happy birthday. Or was it? Her obituary (which spelled her name ‘Douglas’) in 2003 says she lived and worked as an administrative assistant in Washington, D.C., for the U.S. Secret Service, the U.S. Air Force and the U.S. Department of Labor. Who knows what – and who – she crossed paths with? Perhaps it wasn’t even a form letter. In an email, Lance Wolf said this of the 1939 Dallastown High School graduate: “As I recall from my childhood, Miriam Douglass was a quiet, kindly lady who always mispronounced my name… . I haven’t found anyone who ever knew that she worked in Washington… .” All this I just find interesting, and I hope you do, too. Perhaps someone who knew the Dallastown resident, who died at age 82, can tell us more about this quiet, but no doubt interesting, York countian. Also of interest: Bill Goodling – Jerry Ford might have been the most important president he served with.

I also find stuff like this interesting: The passing of an institution.

The Hanover Evening Sun reported about the closing of the Blockbuster video store in Hanover recently.

I didn’t know such stores – once ubiquitous around York County – were still open. But the Hanover store is in the process of closing.

Actually, the Evening Sun reports that 1,500 Blockbuster stores are still open in America.

For the full story, check out the Evening Sun story with the apt headline: “Final act for local Blockbuster.”

Blockbuster and other big box stores helped put movie theaters that operated in many York County towns out of business. Today, one (not counting the Strand-Capitol in York), remains open as a movie theater: The Glen Theatre in Glen Rock.

Now, Netflix and other such mail and Web services are crunching the financially beleaguered Blockbuster.

Blog post of the day: Universal York’s June Lloyd writes about old New Year’s cards from the York County Heritage Trust’s collection. (New Year’s cards? Does anyone send them anymore?) Twenty-eight of these cards are on display at the Trust.

Forum of the day: What were the best books in 2011? Weigh in over at The Exchange.