Wrightsville’s Veterans Memorial Bridge landing may be improved in a tourism initiative spearheaded by Rivertownes, www.rivertownes.org. When it was built in 1930, the bridge carried Lincoln Highway traffic across the mile-wide Susquehanna River. After construction of the Wright’s Ferry Bridge in the early 1970s, the bridge, also called the Columbia-Wrightsville Bridge, has carried mostly local traffic. Background posts: Columbia-Wrightsville Bridge celebrates quiet birthday and Susquehanna bridge makeover flowing along.

Last we heard, plans were under way to rehab the lighting and other historic parts of the Veterans Memorial Bridge.
Now, Rivertownes PA, a tourism agency, has proposed working on the landing on the York County side of the bridge and other landscaping projects across the river in Columbia and Marietta… . 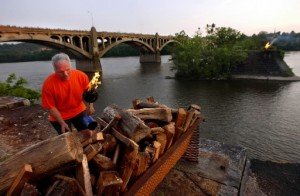 Tourism agencies are working hard to promote the natural aspects of the Susquehanna and its man-made features. Here, Lancaster’s Lee Stoltzfus lights firewood on top of a support for the bridge Columbia-Wrightsville bridge burned by Union soldiers to stop the Confederate advance in 1863. It was part of a bridge burning re-enactment. The 1930 Veterans Memorial Bridge is in the background. Background posts: There’s more right about Wrightsville than wrong and New York Times on its toes in covering rebel raid of York.
The area of the landing or the bridge approach has been the site of many historic events – the Confederate assault on Union troops guarding the bridge in 1863 and close checkpoints assigned to the bridge to screen against sabotage in World War II. It was also the site of a toll booth operating for about a dozen years after the bridge was finished in 1930.
But here’s the neatest thing about the landing rehab proposal, and, unfortunately, it’s not initially on the York County side.
Plans for the east bank call for a pedestrian pier to jut out on existing supports that carried three bridges, including the covered bridge burned in 1863 to thwart the Confederate crossing. The good news is that it might eventually cross the river to Wrightsville. If so, the span would be the seventh bridge to cross the Susquehanna at that point since 1814.
Here is a York Daily Record/Sunday News story (2/29/08) on the landscaping projects:

The towns of Marietta and Columbia in Lancaster County and Wrightsville in York County could see some dramatic changes to their landscape.
Under the River Towns Heritage Development Strategy unveiled Thursday at the Columbia Market House in Columbia, the towns along the Susquehanna River would see improvements that officials hope would spur development while keeping with the towns’ rustic images.
“Opportunities outlined in this plan will improve our quality of life, the economy, the recreation opportunities, and the visitor’s experience in the river towns,” said Claire Storm, president of Rivertownes PA USA.
The strategy outlined a five- to 10-year plan for the three communities, as well as plans for surrounding towns.
In Wrightsville, a revamp of the Veterans Memorial Bridge landing would make the intersection safer and create a pleasing image of a gateway to the river.
David Foulk, a Wrightsville resident and a member of RiverTownes, said the current intersection can be confusing for people unfamiliar to the area and is unsafe for people approaching from a side street.
There are two plans for the intersection and landing. One would include crosswalks, landscaped features, and clearly defined roadways. The other would add a roundabout to those elements.
The roundabout would have gardens, walking paths and a flagpole in the middle.
Wrightsville’s other project would be to make South Front Street, which shadows the river, more appealing and pedestrian friendly.
New curbs and sidewalks on both sides of the street, lighting, and landscaping are planned for the corridor.
In Columbia, an expansion of the riverfront Rotary Park could connect to River Park and a pedestrian pier that stretches into the river would be built under the plan. The pier would use existing, unused supports from a former bridge and could eventually span the river to Wrightsville.
Marietta would see improvements to Gay Street from the town square to the river with new sidewalks, landscaping, additional trees, banners to be hung along Gay Street. The strategy also recommends cleaning the Musselman/Vesta Furnace office building and property.
“The strategy will bring the centers of these historic towns back to life,” said Jonathan Pinkerton, the deputy director of the Lancaster-York Heritage Region.
Funding for the pilot projects will likely come from the state and federal levels, with possible money coming from the York and Lancaster county governments.