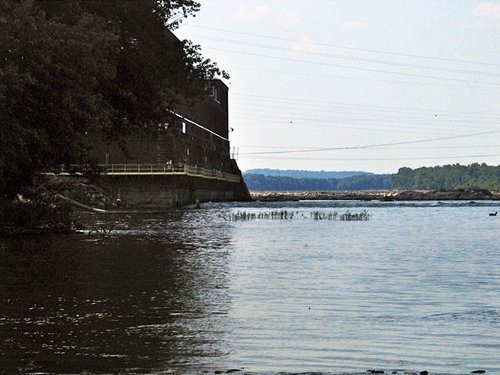 Anglers work the water near the outtake of the York Haven hydropower plant at York Haven, Pa., recently. This photograph of this popular fishing spot was taken from the boat launch in the delta where the Conewago Creek flows into the Susquehanna River. The York Haven dam is the northernmost of the four dams on the lower part of the river. The boat launch area has interesting interpretative signage explaining the scene. Also of interest: Where exactly in the Susquehanna River’s Holtwood Dam.

Here is an edited exchange from my Facebook page about a photo/post concerning Immanuel United Methodist Church in Glen Rock. The attractive church does not have a steeple:

Terrence Downs: Possibly the design of the building reflects a Grecian Revival sense, so that may be the thinking of no steeple. Scale wise for the structure – a steeple may have taken on a squat Germanic belfry/cupola, and that may not have been considered suitable, either.

Richard Bono: St Patrick’s in the city has two unbuilt steeples. And certain denominations never use steeples, like the Quakers. I could be wrong on this but I believe that the Congregationalists are another of these denominations.

Me: Yes, I discussed St. Pat’s in a separate post here. I think Congregationalists had steeples. They were the paradigm of the stately, white churches on the square in New England. But point is that most Methodists churches have steeples, and so did the predecessor structure on that site. It’s just a little different for principal German churches – Lutherans, German Reformed and Methodists (in York County, most Methodist churches were German) not to have steeples.

John Hufnagel, Glen Rock’s foremost historian, commented on the blog post: This is in response to your question about the Methodist Church in Glen Rock without a steeple and this may be way off base, but on July 3, 1906 a severe electrical storm passed over Glen Rock just past midnight. The church which was built in 1870 was struck by lighting and caught fire. The end result was roof and rafter damage amounting to $1800. Maybe when the present building was built in 1927, members remembered this and tried to avoid a repeat of that incident by not having a steeple on the new building???

Blog post of the day, I: Cannonball’s Scott Mingus writes about Tracing your Civil War ancestor.

Blog post of the day, II: Buffy’s World features the Best of Yorkblog.com from last week: The best.