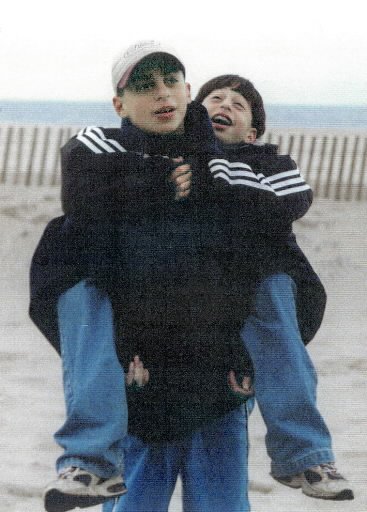 Brothers Zachary and Gregory Witman are seen in this 1990s family photo. Zachary, serving a life imprisonment after a conviction in the murder of his younger brother in their New Freedom home, was later granted a new trial. Background posts: 100th anniversary of drunken Pleasureville brawl, Relative: Evil in Hex murder came from outside and Death row survivor Ray Krone hopes book will open eyes about capital punishment and A list of traumatic, painful incidents that rocked York County.

The case of Zachary P. Witman, the subject of a recent post-conviction appeal ruling, is one of the most-watched criminal actions in more than four-score years in York County Court.
Zachary Witman was convicted in 2003 and later sentenced to life imprisonment for first degree murder in the death of his brother five years earlier.
Gregory Witman was 13 when he died. Zachary Witman was 15… .

Zachary Witman in 2007.
Gregory had been stabbed 65 times with a pen knife and almost decapitated.
York County Judge John Uhler based his decision for a new trial in 2007 on Witman’s attorney’s agreement to admit as evidence at trial a bloody pair of socks the teen-age defendant had been wearing when his brother was killed.

Uhler’s 2007 ruling was overturned by the state Superior Court in 2009. In 2013, he has an ineffective counsel (Post Conviction Relief Act) appeal before the Pa. Supreme Court.
Witman’s trial came soon after another set of landmark criminal proceedings – grand jury findings and subsequent trials of defendants in the late-1960s deaths of a black woman and white police officer.
York Mayor Charlie Robertson was acquitted and nine white former gang members implicated in the York riots-era shooting death of Lillie Belle Allen were convicted or pleaded guilty.
Later, three men were convicted in the shooting death of Police Officer Henry C. Schaad, the second riot victim.
According to “Never to be Forgotten” and stories in the York Daily Record/Sunday News, here is a sampling of other major criminal cases that ended in sentences to life imprisonment, death row or lengthy prison terms late in the 20th century and early in the 21st:
– The nine-day trial of Mark Newton Spotz, ending in a first degree murder conviction and death penalty sentence in 1996, perhaps drew more media and public attention than any other county court proceeding since the Hex Murder trial of 1929. In the Hex case, a trio of defendants were found guilty in the slaying of suspected witch Nelson Rehmayer in an attempt to break a spell.
Spotz of Clearfield County was sentenced to die for killing Penny Gunnet, a York New Salem resident. Spotz also killed two other women. His crime spree started in Clearfield County where he shot his brother in an argument over a gerbil.
— Paul Gamboa-Taylor pleaded guilty to killing five people with a ball-peen hammer and knife in his West Princess Street, York, home.
— James Garrett was convicted for the pick ax-slaying of his 79-year-old mother in her home in an attempt to get the remainder of her $822,000 estate.
— Robert G. Lehr received a life sentence for the 1986 stabbing of a Spring Grove pastor.
— Cornell Mitchell received the death penalty for the butcher knife-slaying of a youth counselor as he slept inside a children’s home in North York.
— Daniel Jacobs was convicted of killing his 18-year-old girlfriend and infant daughter. The victims were found in a bathtub filled with water and chlorinated bleach in a case the coroner called ‘the most brutal I’ve seen.”
— William Babner raped a woman, then shot her and her boyfriend in September 2000. He then dumped them into the Susquehanna River, but they survived. Babner is sentenced to 117 to 235 years in prison.
— Harve Johnson, slayer of young Darisabel Baez with a computer game controller cord, became the ninth York countian on death row in 2009. Eleven York countians now sit on death row.  Twenty-five years before, young Aleta Bailey was the victim in a similar high profile slaying.
— Steven Valinski served the maximum of a 10- to 20-year state prison sentence for the Aug. 31, 1988, bondage-suffocation murder of 39-year-old Ellen L. Swift. The 21-year-old Valinski had cut off body parts and had sliced open her abdomen. He was released from prison on Sept. 3, 2008. Former York County District Attorney Stan Rebert had sought the death penalty for the Red Lion man. “Step aside Jack the Ripper and Freddie Krueger, there’s a new kid on the block,” Rebert said in his closing statement of the 1989 trial. Valinski was convicted of third degree murder.
— Joseph Podlucky was found dead in his car March 27, 1995, in the parking lot near Foundry Park and what was then the Gingerbread Man. He had been shot in the head and robbed of $2.50. Ricky Lee “Rico” Lagares was eventually convicted of third-degree murder and sentenced to 10 to 20 years.
– In addition to the Witman case and a current case involving charges of fratricide in Fawn Township (In that case, Justin Carbaugh was convicted of voluntary manslaughter in 2011 and was sentenced to 6 to 12 years in state prison), here is another case of brother vs. brother violence in 2002: Michael J. Callahan III, 26, was killed days before his planned wedding, when his brother shot him in the chest with an arrow from a compound bow in Manheim Township. James Callahan eluded police for several hours and then two officers shot and wounded him when he aimed an arrow at them. Callahan was found not guilty by reason of insanity in 2003 and was sent to a secure facility specializing in intensive treatment.

– Hubert Michael killed 16-year-old Trista Eng after kidnapping her in 1993. Michael bound Eng with electrical cord stolen from her home, raped her and killed her in state game lands in northwestern York County.

– In the worst school violence case in York County history, Red Lion middle schooler Jimmy Sheets shot and killed his principal in 2003 before taking his own life.

Zachary Witman is led into the York County Courthouse for sentencing. In 2003, he was convicted of first degree murder in the 1998 slaying of his brother. He was granted a new trial this week. For a listing of other major court cases involving York County, click here.
Also of interest:
– Check out York Town Square’s archives, with all posts from the start.
– Check out all posts relating to the notorious Hex Murder trial of 1929 from the start.

– Check out all posts relating to cops and courts, fires and floods.
– York County, Pa., educator recounts school machete attack on ‘I Survived…’