With the weather outside so frightful, this York County scene will warm you up 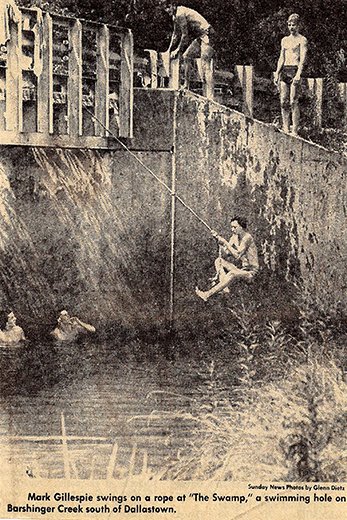 OK, with the Sunday snowstorm, I’m playing with your head a bit. But I’ve wanted to put up this ‘old swimming hole’ photo since seeing it on Joan Concilio’s Only in York County blog some months ago. It takes you back to a warmer York County, Pa. This York Township scene was so inviting I went to the spot the other day. (See below.) Also of interest: Check out these bad weather stories and photos from York County’s past. 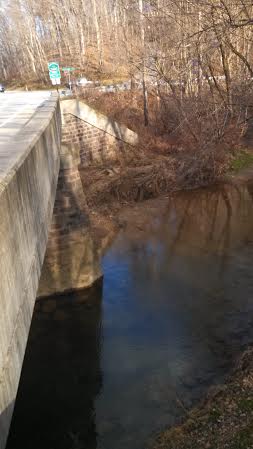 The scene on Barshinger Creek is quieter – and colder. But not as cold as the recent storm, captured in this ydr.com Media Center photo gallery. In a comment on Joan’s post, YorksPast blogger Stephen H. Smith set its location precisely: ‘The Swamp is just a little south of Rye; it is just before Barshinger Creek empties into the East Branch of the Codorus Creek. At that general area five roads converge: Hess Farm Road (has the bridge shown in your picture), Dunkard Valley Road, Arbor Drive, Swamp Hollow Lane, and Swamp Road.’ (See history mystery snowstorm photos below from YDR’s FB page.)

Five storm links from all over … .

1. Weather via a livestream: YDR.com has added a weather cam, which will soon become permanent. For those in York County, it duplicates what might be going on outside your window, although weather varies in our big county. But for those of you living afar – and there are thousands of you – you might find it particularly helpful: Weather cam.

2. A Scribblelive: That’s the YDR in-house name for a live blog, essentially a real time aggregation of social media posts about the weather. They might be staff tweets or posts from others using a common ‘hashtag’: #Pawx. Check out the Scribblelive liveblog on this storm.

3. Scanner squawks: If you want a real time experience, you can listen to the police/fire scanner via your computer. But be careful, you’ll get the same confusing information that police and other emergency workers must deal with. Check out: Scanner.

4. 911 log: York County’s 911 puts out a rolling log of fire/police incidents under investigation. It gives an idea of how busy emergency workers are under trying conditions. See: 911 log.