Winterstown principal about machete attacker: ‘I’m thankful that no one died in my school … ‘ 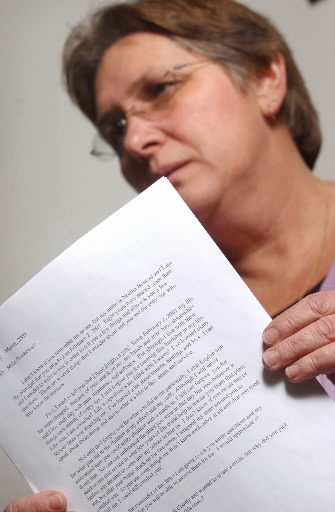 Principal Norina Bentzel, who fended off a machete-wielding madman attacking her school in 2001, sat down for an interview with the York Daily Record/Sunday News in the aftermath of the attack on a Newtown, Conn., school.

Twenty first graders died in that Connecticut attack. In Winterstown, 11 kindergartners were injured at the hands of William Stankewicz. Bentzel subdued the assailant of his weapon.

In her recent interview, Bentzel answered a question that is top of mind after Newtown.

She said she has mentally played through the scenario of what would have happened if Stankewicz had been armed with a gun.

“It would have been awful,” she said. “I’m thankful that no one died in my school that day. It gives me great salvation and motivation to move forward.”

For the full interview, see – Norina Bentzel: “My heart goes out to these people.”

Norina Bentzel talks to a reporter, reflecting on how she fended off an attack from a machete-wielding assailant.