William C. Goodridge: ‘One of the coolest guys you’d ever want to learn about’ – York County treasures, Part III 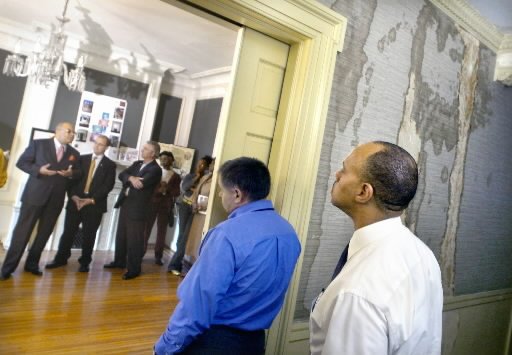 Wm. Lee Smallwood, left, discusses plans for William C. Goodridge Freedom House and Underground Railroad Museum in 2005. A combination of financial challenges and structural issues with the mid-1800s East Philadelphia Street house has set back opening of the museum. The Underground Railroad, its operations hidden in its day, is a story that York County should widely tell today. Also of interest: The story of former slave William C. Goodridge of York, Pa., would play well in Hollywood. Starring Poitier?

That has changed in the past 20 years. Many York County books and blogs pull in accomplishments of women and minorities and development is under way on several inclusive sites.

Exhibit A, when such projects are discussed, is often the Goodridge House, a project still in the works.

The ydr.com story, In York, restoration of Goodridge House moves ahead, catches us up on projects that tell the stories of those generally not well covered in history:

A brick home at 123 E. Philadelphia St. in York that was owned by a prominent black businessman and activist on the Underground Railroad remains closed for renovation.

Restoration of the Goodridge Freedom House & Underground Railroad Museum had been progressing until a few years ago when moisture started seeping into the building, damaging some of the work that had been done.

Officials with the Crispus Attucks Foundation fixed the problem, and the house has been drying out for more than a year now, community development director Carol Kauffman said.

Crispus Attucks recently received a $4,000 grant for the house, she said. The next step in getting the building ready to open to the public is to install a heating, ventilation and air conditioning system.

The William C. Goodridge house is one of several prominent historical sites being saved to tell the stories of how minorities and women shaped York County history.

Few historical sites dedicated to minorities who have influenced American history have been saved across United States, according to a report by Digital First Media. But the Goodridge house in York is one of several local sites that are related to minorities that either are being preserved or have been preserved.

“Goodridge is just one of the coolest guys you’d ever want to learn about,” Kauffman said.

Goodridge was born as a slave in Maryland but was later freed. He learned the barber trade and opened a shop on what is now Continental Square in York, according to the website for the Goodridge Freedom House & Underground Railroad Museum website.

His business prospered, and he expanded into retail, selling candies, wooden toys, jewelry and more, the website states. He also built a five-story building on the square, which was the tallest building in York at the time.

Goodridge risked his life and livelihood by helping slaves to escape to freedom. His home served as a stop on the Underground Railroad, and Goodridge also used his railroad cars to smuggle slaves to safety, according to the web site.

Officials with Crispus Attucks were using primarily grant money for the restoration of the house, Kauffman said. Much of that dried up with the economy.

The goal remains to open the house to the public, she said.

Wm. Lee Smallwood, who helped to lead an effort decades ago to save the house, said he is eagerly awaiting the house being opened to the public.

The Willis House, which is a private residence, has been documented as another stop on the Underground Railroad in York, local historian Scott Butcher said.

Samuel Willis, the son of William Willis — one of the earliest Quaker settlers of York County — was one of the leaders in the Underground Railroad, according to the National Park Service website. He hid slaves in the barn and in the cornfield and later served as a private in the Civil War.

Historic York Inc., a private nonprofit historic preservation organization, worked to save the house on the north side of the York, Butcher said. It has been restored, and restrictive covenants will help to protect it in the future.

Women played a role in a Revolutionary prisoner of war camp, which is in the process of being saved, said June Lloyd, librarian emerita of York County Heritage Trust.

Some British prisoners of war and their families lived at the camp. It is known that the women used pins to make lace, and they sold their work in the community, she said. It shows they were an integral part of the camp, Lloyd said.

In recent years, the Conservation Fund has bought two parcels — totaling more than 160 acres — where historians say the camp once stood.

Preservation Pennsylvania’s review of endangered sites this year listed it as “Saved!”

However, Friends of Camp Security still needs to raise about $400,000 to help pay for the land. Otherwise, the Conservation Fund holds the right to put a 47-acre parcel — the last one acquired that still needs to be paid for — back on the market.

The site has such significance, said Mark Platts, president of the Susquehanna Gateway Heritage Center, that the president should declare it a national monument.

Another site Platts believes should be declared a national monument is the Native Lands Park in Lower Windsor Township.

It is the site of the last village and burial grounds of the Susquehannock Indians. The county condemned the land, known as the Byrd Leibhart Site, years ago for the park.

“They really have nationally significant stories,” Platts said of Camp Security and the Native American sites.

Lloyd said she isn’t surprised by a report that few preservation sites are dedicated to minorities and women.

John Gibson and George Prowell wrote thick books about York County history and they include little about women or minorities.

Years ago, white men did it all, she said. Women and minorities were not allowed to play prominent roles.

Platts said many people think of the Underground Railroad when it comes to black history. But schools in York were segregated in the early part of the 20th century.

In the South, historic sites related to the Civil Rights movement have been saved, and people take tours to learn about it. Smallwood, who now lives out-of-state, said schools where black students attended do not stand anymore in York. And much of the black neighborhoods have been torn down.

Penn Park, which still exists, also has deep history, Smallwood said. It’s where a wagon brought black people from Virginia in the early 1800s and where Squire Braxton, who led freed slaves from the south, built a tin shack that he lived in.

Butcher said he was somewhat surprised that minorities and women do not play a bigger role in the national preservation sites.

“Maybe it’ll be a great call to action to revisit what was important,” Butcher said. 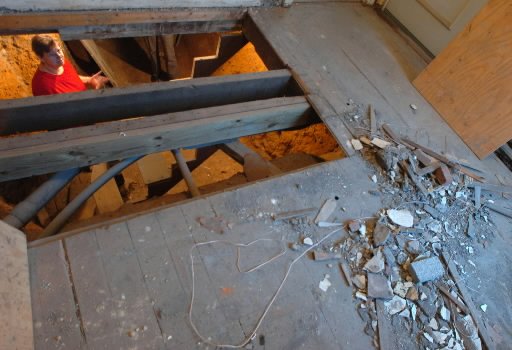 This dirt basement in the Goodridge house is believed to have harbored fugitives. For more on the Goodridge museum, check out the Goodridge Freedom House‘s website. Also, the York Daily Record/Sunday News weighs in on the importance of the Goodridge House and other such sites: Historic sites are part of us.

York County treasures, Part I: ‘So, why care about old – or historic – homes?’