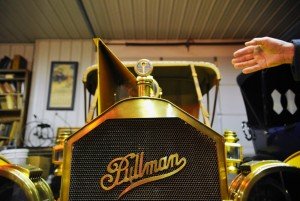 Fred Rosenmiller, York, Pa., collector extraordinaire, is selling this 1910 Model O Pullman Raceabout car, among many other items from his extensive collection of antiques. The car was built in York in its heyday of automaking, in the 1910s. The collectiong is quite varied, ranging from bottles of York-made rye to 65-million-year-old dinosaur eggs. Rosenmiller also has contacted American Pickers of TV fame. Mike Wolfe and Frank Fritz explore collections, often far less organized than Rosenmiller, as part of a History Channel reality show. “They never buy a great deal,” Rosenmiller told the York Daily Record/Sunday News, “but I just thought it would be kind of fun to have them here. The point would be the experience of bringing them in.” Check out that YDR story about the Rosenmiller collection and also the slide show depicting selected items below. Also of interest: American Picker goes antiquing in New Oxford, Pa.

Historical fiction writer  Jeffrey Shaara will kick off the York County Heritage Trust’s commemorating of the 150th anniversary of the Civil War. He will appear in York on June 27.

Shaara is the son of the late Michael Shaara, writer of the popular “The Killer Angels.” Jeffrey’s work  “Gods and Generals” and “The Last Full Measure.”

At Daniel Lady’s: This historic farm will be the site of a Civil War reenactment this year. Check out the details about this event on Gettysburg’s Daniel Lady Farm.

Speaking Dutch: Yes, the German dialect is spoken around Pennsylvania, so much so that a court case recently involved the speaking of Pennsylvania Dutch.

Forum of the day: From the YDR’s Facebook page – So many big stories in the news can lead you right back to York County. Today, some of the greatest players in baseball history were denied entry to Cooperstown because of their history as steroid users. And where did American athletes first begin using steroids to improve their performance? In York County, as detailed in this 2006 story: “Pecs, pink pills and power: How York played a role in the steroid controversy.”