Widespread contour farming in York County, Pa., and beyond goes back only about 75 years 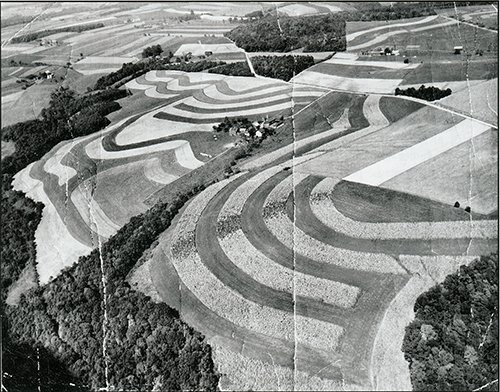 Yes, there is grass and greenery and such below the snow! This photograph remind you of that. It comes courtesy of David Trout and the book ‘Yesteryears in Southern York County,’ and shows contoured land on an East Hopewell Township farm. Interestingly, the widespread practice of contoured farming only goes back 75 years. Farming practices that resulted in the Dust Bowl helped inspire that. ‘Yesteryears’ states: ‘The Penn State Extension service designed conservation plans and strongly encouraged landowners in the 1930’s and 40’s to alternate crops on a hillside to prevent soil erosion.’  Also of interest:  How a bird saw prime York County farmland in 1970.

Well, you might know, but I won’t give it away.

Still on the hunt for Eagles Rock, the topic of a YorkTownSquare blog query.

John ‘Otts’ Hufnagel weighed in with this:

“I sorta lean with the thought of taken from up on the hill near Leaders Heights looking south toward Loganville, down on what is now I-83 and the bottom land filled with water for the lake?”

I’ll have to take a Sunday afternoon drive down there and check on the accessibility of Eagles Rock. 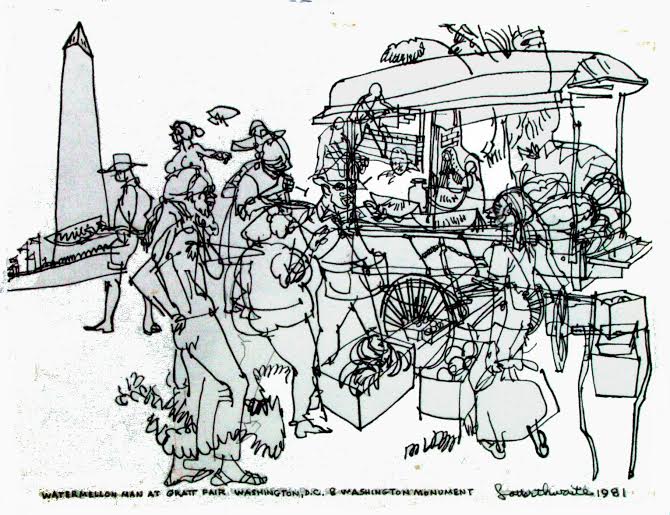 Artist Cliff Satterthwaite often ventured outside York County borders in his time as a resident here – 1950s through 1980s. The Frederickburg, Va., resident captured this scene in Washington, D.C.

History Mystery: This scene shows a major employer of women outside the home 100 years ago.