Who was McKay of York College McKay Hall fame?

For decades, The McKay Company, 850 Grantley Road in York, made chain, welding products and automatic welding equipment. The long-closed company is back in the news because York College is expanding McKay’s already expansive former building. This photograph, from ‘Greater York’ in action, show the immensity of the building when it operated as McKay Company. Its expanse is hard to gather in from the road. (See rendering of McKay expansion below.) Also of interest: Check out this informative map of York College of Pennsylvania’s expanding presence and How a bird see the original part of York College’s campus.

McKay Hall at York College of Pennsylvania is growing higher with a planned two-story addition.

That expansion will help accommodate a new hospitality recreation and sport management studies as well as provide space for an larger nursing department.

All this raises the question about how McKay Hall got its name.

That is McKay of the McKay Company fame.

Here are some bullet points from ‘Greater York in Action,’ a late-1960s publication of the York Chamber of Commerce:

– The McKay Company expanded to York from the Pittsburgh area post World War I. Its early specialization included electric welding in the chain industry, then in demand with the growth of the automobile.

– Over time, the company made welding electrodes, which became a major product line.

All this points to a change in the way York is expanding. In the old days – in those days when McKay was first entering the scene in York – factories expanded when they added new product lines. With the growth of York College, representing the service or information sector, that same building is expanding to accommodate new academic fields.

Information is the new oil. Or to torture the metaphor, McKay expanded in the 1920 to because of the growth of the oil-dependent automobile. McKay is expanded today because of the increased need for information. 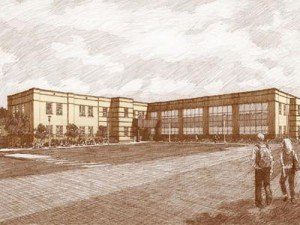 A rendering of the McKay project at York College.