Who can ID this mystery school in southeastern York County?: Linked in with neat York County history stuff, Aug. 3, 2012 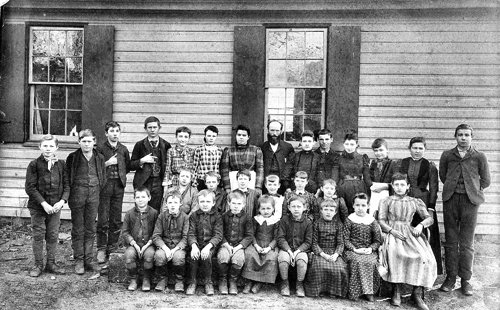 This one-room school photo comes from somewhere in the Hopewell townships. Doug Winemiller of the Stewartstown Historical Society is looking for help in identifying it. ‘The donor was sure it was from this area, but could not provide any clues as to location or identification of the school,’ he wrote. Since we believe it is from the early 1900’s it will be hard to identify… . We would like to use it in our one-room school program.’ If you can help, comment below or contact Doug: ljtjwinemiller@zoominternet.net. Also of interest: This one-room school stood in Goram. Where’s Goram?

Denig received a Medal of Honor for his actions aboard the USS Brooklyn in the Battle of Mobile Bay in 1864.

The league is looking for the public’s help in locating Denig descendants, according to a ydr.com story. Family members must request for his name to be added to the Court of Valor at the cemetery, a Marine Corps League project.

If you can help, contact Dave Brady at dncbrady@comcast.net.

Bay Window Books: On yorktownsquare.com, we like to follow books and booksellers. So we note that Bay Window Books is closing its Dallastown store. But other used book dealers are honoring its credit.