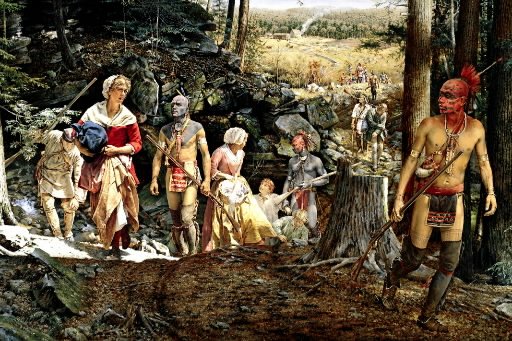 Historical artist Robert Griffing painted this scene of the capture of Mary Jemison. A print can be scene in the Glatfelter Memorial Library in Spring Grove, Pa. George Glatfelter II donated the print in 1998. Glatfelter paper owns the land where the Jemison family homestead stood in Adams County. ‘The White,’ Deborah Larsen’s historical novel based on the life of Mary Jemison, was the region’s ‘One Book, One Community’ choice in 2005. Background posts: 400 years ago, John Smith explored Chesapeake Bay – 1 of 20 iconic images, American Indians’ carvings almost forgotten treasure and Project uncovers hidden American Indian mural.

York/Adams most celebrated direct link with the American Indians that inhabited the region west of the Susquehanna and east of South Mountain happened 250 years ago. (John Smith is not believed to have made it as far as future York County in 1608).
In 1758, Indians captured 16-year-old Mary Jemison in western York County.
French and Indian War hostilities led to a raid in what is now Adams County that led to the Indians carrying away Mary’s family… .

The Indians killed Mary’s siblings and parents, but Mary went on to live with her adopted people, outliving two American Indian husbands.
She chose to live among the Indians and became known as the White Woman of the Genessee.
This is the best-known incident of hostility between York County white settlers and Native Americans. When settlers started crossing the Susquehanna in 1730, they faced little resistance from the Susquehannocks and other indigenous groups. This meant farmers could begin their work without appreciable energy-draining concerns about hostilities.
A recent York Daily Record/Sunday News story (4/7/08) told of a celebration marking her abduction:

The 250th anniversary of Mary Jemison being taken from her home in Orrtanna during the French and Indian War was marked Saturday (April 5, 2008) with a celebration.
Although Jemison had only lived in Orrtanna for a short time, her life was changed forever on that day.
Her parents, brothers and sisters were killed by Shawnee abductors, but the 16-year-old was spared and later adopted by two Seneca women. She lived the rest of her life in the American Indian culture.
She died at the age of 90. On Saturday, about 200 people surrounded the Mary Jemison monument outside of the St. Ignatius Loyola Catholic Church, Orrtana, dressed in regular clothes and American Indian dress with feathers and war paint.
Descendants of Jemison talked about their ancestor’s way of life.
Ted Bartlett came to talk about his father’s “pageants” on Jemison, written in the 1950s and ’60s. Bartlett said his father wrote them to explain Jemison differently than she had been seen in the past.
Prior to the narratives, “she was referred to as a tragic character,” he said.
After doing research, Bartlett said his father found that although Jemison had horrible moments in her life, she overcame them and became a heroic character.
” Mary had every excuse to be negative, but she climbed on top of it all and was positive,” Bartlett said.
Jemison married a chief. Their first child died, but despite her depression over the loss, they had another.
Her husband was later assumed to have been killed when he did not rejoin her after the tribe moved from Ohio to New York. She married another chief, and they had six more children. The land she lived on in Gardeau Flats, located in Letchworth State Park in New York, is near where Jemison’s eighth-generation descendant, Peter Jemison, lives.
Peter said it was his first time in the area his ancestor had lived. He said the area is beautiful.
“I imagine it would be rough trying to cut a living space around here,” he said while looking at the forests.
Allan Jamieson Sr. and Jr. spoke about life during the times of their ancestor. Jamieson was the correct spelling of Jemison’s last name, but a historian in the 19th century misspelled it in his book “A Narrative of the Life of Mrs. Mary Jemison.”
Jamieson Jr. said what makes his ancestor’s story so appealing to people is that some think they have a rough life. Then they hear about her life and think, “Wow, my life isn’t so bad after all,” he said.
Storyteller Ann Griffith took parents and children around the church grounds on “A Walk With Mary Jemison,” in the character of Jemison.
During the walk, she told the children about different landmarks where Jemison may have been.