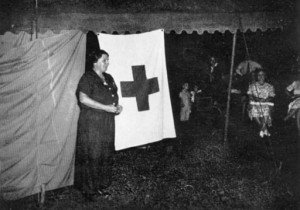 Dr. John C. Bieri put on a magic show for Naval Ordnance Division workers at White Oak Park. One account states that he pulled rabbits out of hats, changed the color of flowers, converted a flag into dozens of flags, spilled candy from empty boxes and made boxes, tables and chairs disappear. Here, a first aid station operates at the NOD White Oak Picnic.

Prompted by a reader’s query, a previous York Town Square post asked for photos of White Oak Park. See: Fun in North York
Well, I found some.
The park was a picnic grounds and a hangout for teens and concerts in the 1950s and 1960s. It was located in the vicinity of the Masonic Lodge, north of York.
I ran across these two photos and six others in a Blaw-Knox Naval Ordnance Plant publication. The plant now forms part of Harley-Davidson See recent H-D posts.… .
The pictures capture NOP’s second family picnic on July 29, 1945.
The outcome of World War II was still hanging in the balance. These were the still-troubled days before the atomic bombs and V-J Day, Aug. 14, that marked the war’s ending.
But those worries seemed to be set aside for a spell.
“The day was a big one for both kiddies and parents,” the publication stated.

Additional posts on White Oak Park or the Shady Dell: