Which church steeple is the tallest in York County? Linked in with neat York County history stuff, March 18, 2012 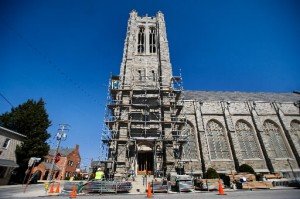 Restoration work on St. Matthew Lutheran Church in Hanover is expected to take a couple of years. Here work begins on the large church’s steeple last week. Which leads to the question about the tallest steeple among York County’s 500 or so churches. We at least know this: Among York’s churches, First Presbyterian’s steeple comes in at 211 feet, according to Ben Hoover of First Pres’s 250th anniversary committee. Christ Lutheran Church’s needle tops out at 177.  For details about St. Matthew Lutheran’s renovations, see the Hanover Evening Sun. (Click on image to enlarge.) St. Matthew is known for its immense Austin pipe organ, and a playable harpsichord sits in its sanctuary. Also of interest: How big is that ornament atop the steeple at First Presbyterian Church in York? and St. Patrick’s: A church without a steeple, by design.

The York County Heritage Trust has interesting posts on its Facebook page, which has been up for many months. For example, it has  a series of posts going on Bessie Bonham of Bonham House fame and a leading lady of York in the early 20th century.

Here’s a description from FB:

” Elizabeth Bonham, known to many as “Bessie,” was a prominent woman in York County from the late 1800s until the mid 1900s. Bessie had a love for history, philanthropy and traveling. Bessie frequently traveled around the world from 1880 until 1930 … .”

In fact, Bessie has her own page: https://www.facebook.com/BessieBonham.

New to the blogosphere: The York County Heritage Trust has put up a blog with an initial post:  Welcome to our blog.

And watch for the tweets: The Trust is also on Twitter:  York County Heritage, @yorkhistory

Better late …: The Hanover Fire Department has granted awards for heroism in fires from years past. You’ll remember some of these fires. Check out: The Hanover Evening Sun.

Gettysburg tourism: A documentary is under way with the intriguing title – “Addressing Gettysburg – 150 Years of Tours and Tribulations.”

Yorkblog post of the day: The best piece of Only in York County mail I’ve ever received, by Ask Joan’s Joan Concilio.