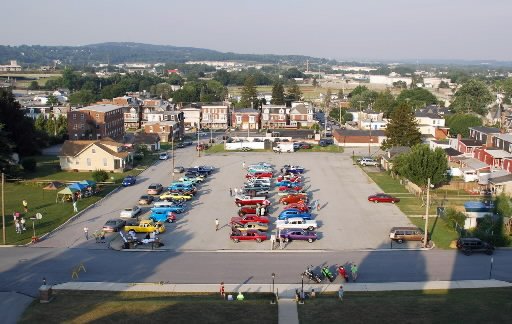 Can you figure where this photo was taken? It’s not a photograph you see everyday, but maybe you can figure it out. Answer below. Also of interest: What does this history mystery photo show?  and Mystery photo: Where is that student sitting?.

So folks know, the YDR is aware of the Sports Hall of Fame: York County sports a miniature Cooperstown. York County must do more to recognize our achieving sons and daughters. Football Hall of Famer Chris Doleman, for example, has a street named after him.

Here is Roy’s letter to the editor about Vic Wertz: 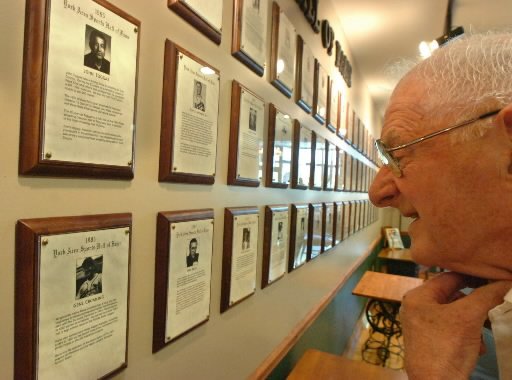 For Major League Gene Crumling looks at the Hall of Fame at 224 North George Street, York.

“I noted on the 4/4/13 opinion page of the York Daily Record that there is an effort underway by folks in Berks County to name a youth sports facility after York native Vic Wertz. I also noted that in your article you state that Mr. Wertz has received no such honors in York County, and you feel that there should be some way to honor the legacy of a major league baseball player from York.”

“I guess that there are still individuals in York County (and obviously on your editorial staff) who may not have heard of the York Area Sports Hall of Fame. This is disappointing to me, as I’m sure it is to my other associates on the York Area Sports Night Committee, who have worked long and hard to insure that individuals in York County with a strong background in athletics and efforts to promote athletics, are properly honored and remembered.”

“To enlighten those who may be somewhat in the dark on this issue, the Hall of Fame was established in 1973 and in 1981 Vic Wertz was inducted into the York Area Sports Hall of Fame, along with Tom Keesey, C.C. Richards, and Connie Hirschman Shorb. In 2007, after many years of being without an actual physical home to house it, and especially due to the generosity of Mr. Jeff Lau of Insurance Services United, the Hall of Fame became permanently located at 224 North George Street, in downtown York, with plaques and photos that make up the hall of fame display hanging on a 75-foot long wall just inside the building’s entrance.

“The general public is invited to view this display any time during normal business hours and become aware of many of the individuals who have made up the York area’s athletic past, including Vic Wertz. It is the hope of the Sports Night Hall of Fame Committee that over the years many more deserving individuals will be added to the roster of members of the York Area Sports Hall of Fame.”

About the photo above

This photograph is taken from the terrace on the steeple of Messiah United Methodist Church, North York. This photo shows a car shows sponsored by the church several years ago.