Pesky rapids in the Susquehanna? York Haven canal smoothed that rough patch in 1797 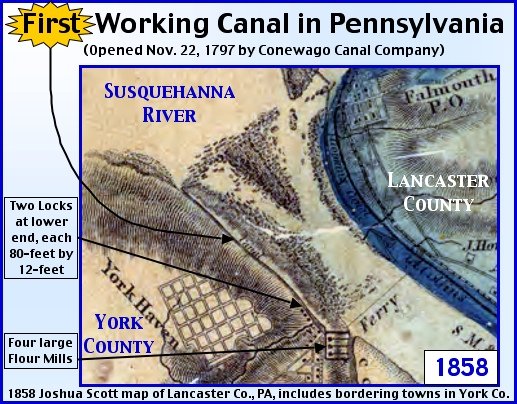 Stephen H. Smith, in his YorksPast blog, is making wonderful contributions to our understanding of York County, Pa. In this graphic, he addresses a topic I’ve always pondered: Where actually was the canal at York Haven. Here he shows us – and in this Yorkspast post, he explains many things about the man-made waterway. The canal by-passed rapids in the Susquehanna River and fed commerce in York Haven and the lower Susquehanna starting in the late 1700s. Stephen gives this excellent summary: ‘The canal was about one mile long, hugging the York County bank of the Susquehanna River from the top of the Conewago Falls, downriver to two locks at the lower end, near present day York Haven; all required so that river traffic could negotiate the 19-foot drop of the Conewago Falls.’ I expect to make a field trip up there when the temperature get above freezing. The post also shows an intriguing mural of the canal by artist Cliff Satterthwaite. And check out this subsequent Smith post about the York Haven Paper Company. Also of interest: Susquehanna River shaped York Haven.

+++
A pair of eagles have captivated a region – and maybe beyond.

During daylight hours, people all over the place have the livestream of the Codorus eagles, nesting with two eggs, open on their iPads and other devices.

So the York Daily Record has created a site for one-stop viewing of these eagles at Codorus State Park in southwestern York County. There’s a lot of other information on that site as well. Check out: Watch eagles in Codorus livestream.

Btw, eagles have been part of this region’s landscape forever. Evidence of that? The most popular high school sports mascot? The Eagles.
++++
Sign of life: York Sunday News column has followed up news of development dollars going into the West Market/Beaver Street intersection with memories of what that place meant to York 50 years ago 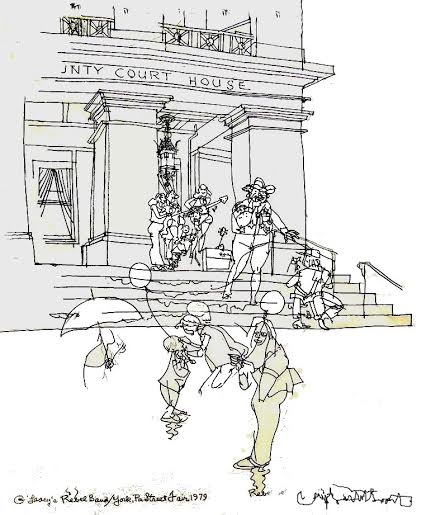 The late James ‘Rebel’ O’Leary was a character around York, Pa., and, well, a lot of places. York Daily Record columnist Mike Argento once wrote: ‘Rebel was well known in these parts for his family’s musical extravaganzas. For years, Rebel and his band, The Rebelettes, performed on the back of a flat-bed truck in York’s Halloween Parades. Later, when, perhaps, the flat-bed wasn’t available, Rebel would promenade in his Econoline van – the red one emblazoned with a Confederate flag and his self-bestowed title, “King of Country Music.” ‘ Well, artist Cliff Satterthwaite  – yes, the same, ubiquitous artist referenced above – reminds us about Rebel, capturing him performing on the York County Courthouse steps in 1979.
+++
Deep roots: Those of Greek heritage and the Greek Orthodox Church have been around York County “a while.”

And so has one of its congregation’s three-time-a-year events – Greek Orthodox Church of the Annunciation’s Greek Food Festival. The next festival is set for this weekend at the York Township church.
+++
History Mystery: Maybe you know what gave this road its name?