When York County, Pa. Bibles were printed in German, and Fractur was the typeface 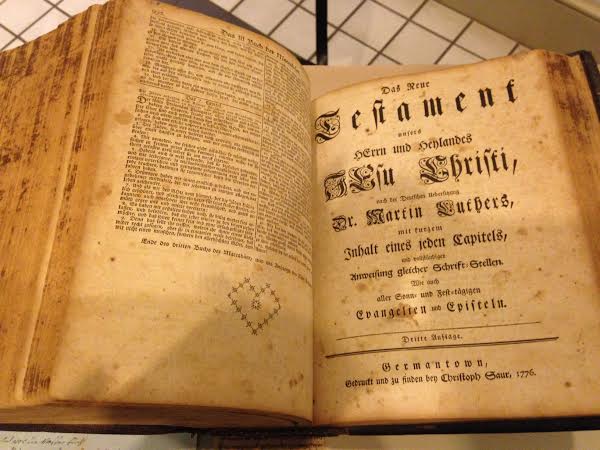 This early American Bible was on display at the recent unveiling of the 2014 Journal of York County Heritage at the York County Heritage Trust. The German-language book was published by Christopher Saur in 1776 and used at Black Rock Church of the Brethren. ‘This was the first Bible printed with American-made paper, and American-made typeset,’ Dianne Bowders, who put up the small exhibit, told a gathering at the event. Also of interest: Composer Dominick Argento profiled in 2014 scholarly journal.

Church of the Brethren historian Elmer Gleim’s article on his denomination’s gathering in York a century again is his third article published in a scholarly journal – the Journal of York County Heritage.

His daughter, Dianne Bowders, spoke on his behalf at a recent unveiling of the 2014 journal. She said the 98-year-old has experienced some ill health, and he’s recovering from a stroke.

That has challenged the right-handed scholar’s ability to write, so he’s learning to write with his left hand, so, according to his daughter, “there may be another article next year.”

In her remarks, Dianne Bowders told an audience at the journal’s unveiling about Church of the Brethren history, as well as some details about an early American Bible.

Dad was born during WWI, lived through the 1918 Spanish Flu, the Great Depression and WWII.

He is the eldest of 13 children. Dad is 7th generation Church of the Brethren directly descended from Germantown ancestry.

He was ordained as a minister more than 80 years ago and served as a public school teacher (last at William Penn) for about 31 years.

Dad is the Brethren Historian for the Southern District of PA for more than 50 years and wrote numerous York County Brethren Church Histories. His History of the the Black Rock or Little Conewago congregation tells the story of this very early, 1738, York County church.

For those of you unfamiliar with the Brethren, this German Order first arrived in Germantown in 1719 and moved into York County about 1728/29.

The Little Conewago or Black Rock Church was their first church in the county. Black Rock is south of Hanover near Glenville along the PA/MD border. Michael Danner/Tanner, surveyor of the Monocacy, was listed as a member of this church.

These early church members never lost contact with the Gemeinschaft or Mother Church in Germantown. Annual Meeting was a way of keeping in contact- like an annual family reunion. In fact, Black Rock bought and read from a Christopher Saur, the younger, 1776 German pulpit Bible.

I’ve brought with me the actual Christopher Saur, 1776 German, pulpit Bible used at Black Rock. This was the first Bible printed with American-made paper, and American-made typeset.

Saur used Fractur/blackletter for his type-face as this came comfortably close to what the German immigrants were accustomed to reading back home.

The 1776 Bible was the Saur’s 3rd printing. Although Saur printed sufficient pages to bind into 3000 Bibles, fewer were bound. As of 1940, there were only @ 200 known copies in existence. Some in private hands were not counted. There are fewer copies today.

(1) There are several legends associated with this edition.

One legend calls it the “Gun Wad Bible”. Saur, the younger, was an elder or bishop in the Germantown/Mother church, and used the second floor of the meetinghouse to dry and store leaves of the Bible. During the Battle of Germantown (Oct. 1777), paper was taken from the meetinghouse, rolled into cartridges, and filled with black powder for the Brown Bess muskets.

(2) Another legend holds that AFTER the Battle of Germantown, British soldiers seized many unbound pages to make litter for their horses and that HORSE HOOVES marked the pages.

(3) A third legend tells that Saur’s daughter collected enough pages to make Bibles for each of her 10 children.

After 1850, German was no longer read or preached in most Brethren churches and these Good Books were replaced with English versions.

I hope you’ll take time to look at this rare book, and that you also take a few minutes to read Dad’s Journal article. It’s about the 1912 Church of the Brethren Annual Conference at the York Fair Grounds. This was the last time Brethren ever met at a fair ground, due to poor acoustics, but more likely due to worldly distractions.

This Annual Meeting also signaled an END to the Brethren requirement to wear the garb and led to the denomination appearing more mainstream. 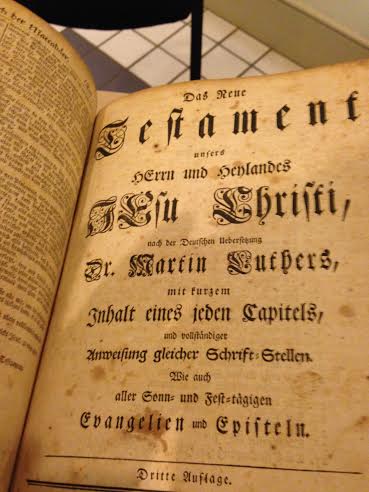 A closer look at the Saur Bible.