When the waters of the Codorus challenged the Rocks of the Glen, Part 2 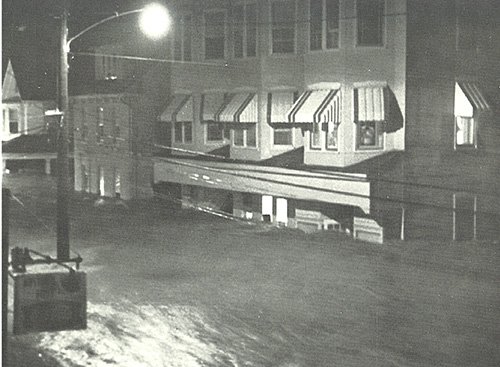 The high waters spawned by Tropical Storm Agnes struck Glen Rock in 1972. Here, high water covers Hanover Street. The southern York County, Pa., borough’s position in a valley carved by the Codorus Creek has made it a target of high waters. Also of interest: When the waters of the Codorus challenged the Rocks of the Glen, Part I. 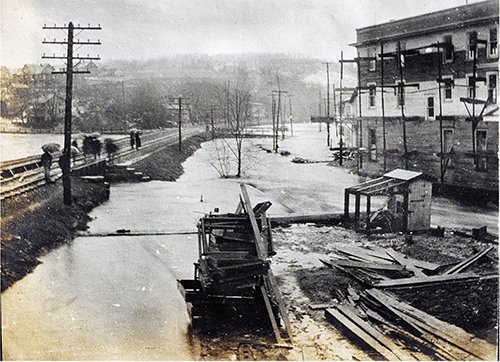 In 1908, the mill race, at lower left, and Baltimore Street were covered with water.

Even with the preparedness, the loss caused by the water amounted to several thousand dollars. The cellar of Neuhaus and Neuhaus was flooded and some of the contents carried away, including 100 pounds of dynamite. Another interesting situation for D.E.P.

On July 7, 1911 the worst flood to date in the life of Glen Rock caused from $30,000 to $50,000 dollars in damage. The rain descended in torrents and before the residents of town even realized it, the creek had risen to flood stage and the water was sweeping into their homes before they could make a move to save their property. The home of Thad Snyder at the corner of Manchester and Pleasant Streets had water almost to the first floor ceiling and after the water receded, part of his house was gone.

J. Victor Wambaugh, at the Glen Rock Steam bakery lost his bread, wagons, sleighs and had a shed carried away. Miller and Cramer Meat Market lost a carload of salt. The First National Bank received about three feet in the bank. The force of the water shattered the plate glass door on the front of the bank. Glen Manufacturing lost lumber, building materials and finished work, all of which was carried away. The next day, employees went out into the fields downstream to gather what they could find.

Walter Seigman was struck by lighting and one arm was burned. The stone home of Artis Bamforth located at the corner of Church and New Streets had the first floor filled with water causing much damage. By August 31, 1911 the house was demolished. All in all, Glen Rock suffered more damage than any other community in York County affected by this storm. 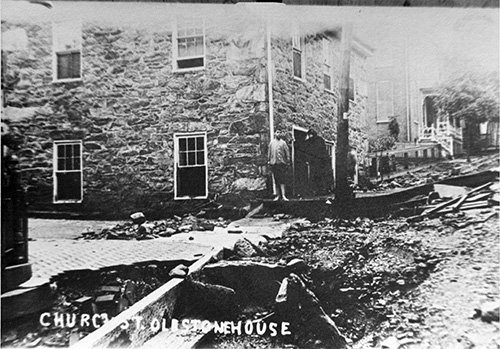 In the 1911 flood, Church Street, above with Bamforth house is show. A bakery was damaged, below, on Hanover Street 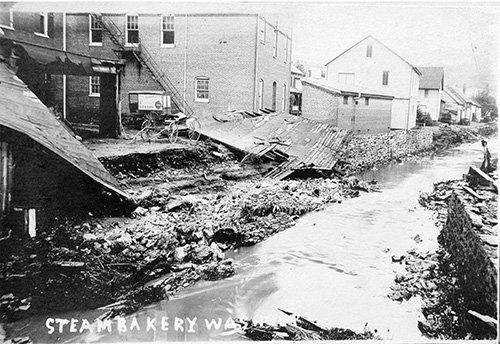 On August 3, 1915 a destructive flood visited Glen Rock causing damage estimated at $15,000. About 4:00pm the water became so high that people moved some of there belongings to places of safety.

Large and deep washouts occurred on practically every street with Manchester, Hanover and Church Streets being the worst. The bridge at the Centerville dam was washed away as was the bridge at the Heathcote felt mill dam on Baltimore Street. 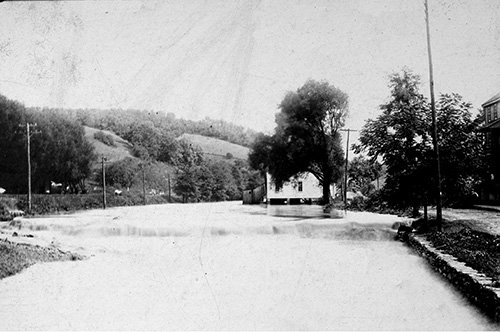 Steady rain over the period of August 22 – 24, saw Glen Rock once again receive serious flooding. Since York was also hit hard by this storm, most of the coverage by the York, Pa. papers dealt only with York, however there was some mention of Glen Rock.

The foundation of the building owned by Foust and Hershner of the Glen Rock Garage on Baltimore Street was weakened by the high waters, and the building was partly caved in. High water also washed away the fence at the Glen Rock baseball diamond (Centerville).

On Thursday, June 22, 1972, early flooding of the Codorus Creek, caused by heavy rains from Hurricane Agnes, tripped the fire siren at 4:00 a.m. alerting citizens of the borough. The waters receded, but by 6:00 a.m. had risen to the height of 10 feet at some places on Water, Baltimore, Main, Manchester and Hanover Streets.

Mayor Maynard Messersmith, proclaimed a state of emergency at 6:00 a.m. with emergency services set up by the fire police and civil defense. The Water Authority went to York County Civil Defense to request water. The National Guard sent a 500 gallon water tank to town.

The National Guard was requested and Colonel Gross, County Civil Defense Director, approved the request with the Guard arriving shortly thereafter, being housed in the Glen Rock Community Building and patrolling the town.

Lt. Frick of the National Guard felt that Glen Rock was in good control of the situation and that perhaps his unit could be released for duty in other areas. It was felt that by 8:00 p.m. Sunday, Glen Rock volunteers would be able to take over guarding the town and that the 10:00 p.m. to 6:00 a.m. curfew would be in place until at least July 2, 1972.

The Community Building on Baltimore Street and Trinity United Church of Christ on Manchester Street were designated as distribution centers for cloths and food for the families that had lost their possessions during the flood.

By Friday, June 23, the cleanup process had begun. The downtown businesses and factories were almost entirely at a standstill. All of it had come about in a matter of a few hours when the South Branch of the Codorus Creek went on a rampage Wednesday night and Thursday morning.

The Gothic interior of Zion Lutheran Church, in the center of the ravaged area, had an estimated $150,000 worth of damage alone The water had reached three feet above the entrance steps into Peoples’ Bank.

A final touch of misery came in the next day or two as an insurance agent was making his rounds to confirm that, yes, it was true that the standard casualty insurance policy does not cover damage from flood or surface water. However, the mood around town seemed cheerful. Nobody had been killed, nobody hurt, and however vast the cleanup job was, it was getting done.

Downtown Glen Rock had been hit hard as the Codorus flooded the downtown streets and people had been evacuated from their homes. The cars that were pulled up on the hill from their watery resting places had broken windows, smashed hoods and fenders, debris hanging everywhere on the cars, as well as mud inside and out. A car that had washed from Ken Keller’s garage at 50 Baltimore Street, came down Hanover Street and floated past the Water Street intersection. Rev. Allan Wysocki, then pastor at Zion Lutheran Church, was said to have found his new camper near Seven Valleys, some six miles down stream.

Mrs. John Houston, 30 Water Street, remembered how she looked at the back of the OK Food Market she and her husband had operated for more than 20 years and watched the swirling water destroy virtually all the contents of the store. The high water mark on the door was over her head.

On Sunday, June 25, members of Zion Lutheran Church met at 8:15 a.m. for a brief service on the grounds of the flood-ravaged church. Following the service, the task to cleanup got underway. The sanctuary was a shambles. The water rose to the pulpit, lifting pews right off their bases and floating them around. The organ was also lifted by the water and other furnishings scattered, soaked and mud covered. Over 200 volunteers helped with the cleanup.

On September 26, 1975, Hurricane Eloise blew through central Pennsylvania bringing a flooding situation to Glen Rock for a second time within three years. The damage was no where near what it was in 1972. The Lutheran Church got about one inch of water in the sanctuary, however the basement was a total disaster.

All in all Baltimore, Water and Hanover Street had about two to three feet of water in the street. So much for flooding every one hundred years. But wait, there is more.

On September 6, 1979, tropical storm David came whirling through the area putting down four inches of rain between 2:15am and 10.00am. The depth of the flood water ranged from eighteen inches near the Valley Street bridge to seven feet in the basement of Zion Lutheran Church, which by the way, it did not reach the first floor. Overall, there was about $100,000 in damage.

On October 1, 1979, tropical storm Frederick caused flood damage within the downtown area. After this flooding of the downtown area, less than a month after tropical storm David caused damage, the borough council held a meeting with Congressman William Goodling, State Officials from Harrisburg and residents. They promised financial help to make improvements, but were unable to commit as to when the money would be available.